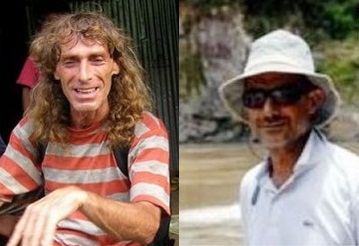 Paulo Bosusco, 54 (left) and Claudio Colangelo, 61, are said to be "well" but the clock is ticking as their kidnappers set a deadline for demands

ROME– Two Italian nationals kidnapped in India last week are reported to be “well” and “receiving food,” but their kidnapers have outlined tough demands for their release.

Paolo Bosusco and Claudio Colangelo were taken by Maoists in Orissa, East India, last Wednesday during a trek in a tribal area of the region.

The report of their good health comes after kidnappers prolonged their ultimatum for demands to be met by 48 hours following pressure from Naveen Patnaik, the governor of Orissa. A deadline has now been set by kidnappers to tonight (Tuesday).

Italian Foreign Minister Giulio Terzi emphasised the “absolute priority” that must be given to freeing the Italian hostages and ensuring their safety in a telephone conversation with his Indian counterpart S.M. Krishna. During the conversation, Krishna assured him of the “maximum commitment” of the Indian authorities.

Contact with the kidnappers has been enabled through mediators who have been named as Narayan Sanyal, a guerrilla leader imprisoned in the neighbouring state of Jharkhand, and lawyer and human rights activist Biswapriya Kanungo.

A list of 13 demands has been drawn up by the kidnappers. Included in the list is a demand for the government to put an end to all operations against guerrilla factions, in particular to ‘Operation Greenhunt’, which has been running for more than two years. In addition, the kidnappers have requested the release of three key guerrilla suspects including the wife of the rebel Maoist leader Sabyasachi Panda and 600 prisoners linked to the protests against the Posco and Vedanta steel factories. Demands were also made for the return of expropriated lands to farmers and the closure of bauxite mines as well as the revision of several industrial projects.

The list of demands bears the signature of Sunil, the nom de guerre of the secretary for the organisational Commission for Orissa of the Cpi-M, the Indian Communist Party, of which the kidnappers are members.

According to Rome daily Il Messaggero, a similar list had previously been presented to the Indian government following the kidnap of an Italian state official who was released after long negotiations between the Orissa government and Maoists. However, Maoist rebel leader Panda has since claimed that the Orissa government did not abide by the negotiations, which might have prompted the latest kidnapping.

The deputy of the Puri police and head of the intelligence service in the area P.K. Mishra described the latest abduction as “A terrible fatality.” He told Italian news agency ANSA that the type of tourism the Italian nationals were involved in is “un-invasive” but “too risky,” adding that “there are dozens and dozens of agencies and tour operators which organise visits in tribal territories without permits.”

This hostage crisis is yet another strain on Italy-India relations, occurring just weeks after the detainment of two Italian servicemen in Kerala accused of shooting and killing two Indian fishermen they allegedly mistook for pirates in Indian waters. Today Judge Kollam, who is in charge of the case, extended the servicemen’s imprisonment to a further two weeks.