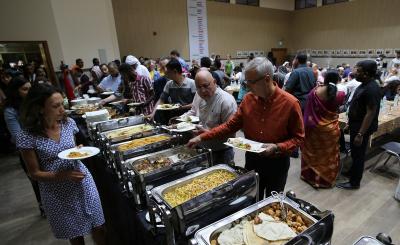 ROME - Peace initiatives aimed at cross-cultural tolerance set out by Bahrain and the United Arab Emirates (UAE) have been at the forefront of a concerted effort from the Arab Gulf to combat religious extremism during Islam’s Ramadan. Thanks to their actions, important measures aimed at promoting cross-cultural understanding and social cohesion have taken root, and their actions must be heeded on a wider scale as Islamophobia continues to grow across Europe and further afield.

The move has followed the decision taken by extremist leaders to piggyback the holy month to create or deepen social fractures. Typically a time of spiritual reflection, prayer, good deeds and time with family, friends and the wider community, extremist preachers and terrorists across the Middle East and beyond, have sought to exploit Ramadan to convince their followers to commit atrocities. This was the message delivered by the leader of the Islamic State of Iraq and the Levant (ISIL), Abu Bakr Al Baghdadi, during his latest video appearance in late April in which he praised the attacks in Sri Lanka and encouraged new terrorist plots in France and North Africa.

The Middle East is already deeply divided along sectarian lines and has witnessed widespread atrocities carried out by ISIL and other terrorist groups against religious minorities. The underlining sectarian tensions that favoured the rise of ISIL across Iraq and Syria are yet to be addressed, civil wars continue to rage on in Libya and Yemen and tensions between Iran and the US have steadily increased. These rising tensions have, furthermore, embroiled a part of the region that has to date represented somewhat of a haven of stability - the Arab Gulf. While a full scale conventional military confrontation between the United States (US) and its allies, and Iran and its regional proxies, is unlikely, polarising rhetoric, US led military manoeuvres, and attacks by Iran’s cronies have been enough to compromise the Gulf’s delicate equilibrium.

It is against this backdrop that leaders in the Arab Gulf have attempted to promote a culture of mutual understanding and tolerance to offset the dangers extremist preaching represent, amongst which radicalisation and violence. This has prompted initiatives aimed at cultural understanding as embodied by the ‘2019 Year of Tolerance’ celebrations in the United Arab Emirates (UAE). The event saw Hindu, Christian and Muslim leaders come together to spread a message of peace while Muslim’s were invited to spend the Iftar – Ramadan’s fast break after sunset – in Dubai’s St Luke’s Anglican Church alongside practising Christians.

Bahrain and the UAE have long been at the forefront of the fight against religious extremism, and have organised a number of activities, both at an institutional and civil level, aimed at promoting mutual understanding and cooperation between the region’s various religious groups. The Pope’s landmark visit to Abu Dhabi in February 2019 effectively constituted the successful culmination of a long process, started back in 2016 in Marrakesh, that focussed on tolerance, peace and religious freedom. As a Muslim majority country characterised by a diverse population, Bahrain has long been aware of the need to empower all ethnic groups and the members of religious minorities. This is reflected in the fact that key diplomatic posts have been filled by Jewish, Christian, Shia and Sunni ambassadors. Examples include Christian Ambassador, Alice Samaan, to Brussels, and former Jewish Ambassador, Houda Ezra Ebrahim Nonoo, in Washington

To date, these initiatives have seemed too little in the face of jihadi violence and sectarian policies which continue to characterise peoples’ livelihood in large swathes of the Middle East. Yet the Arab Gulf is, currently, largely stable while mutual tolerance, cultural exchanges and peaceful coexistence between different ethnic and religious groups continue to form part of everyday life.

Conversely, the West is notably more politically polarised than it has been in recent times. Statistics regarding the upcoming European elections indicate that religious extremism is a key source of concern among Europeans, while prejudice and the conflation of Europe’s Muslims with the jihadi terrorist threat are both on the rise. In some European countries Muslim communities live in completely separate areas from the rest of the population and the lack of interaction contributes to rising mistrust and societal tension. This, in turn, has certainly contributed to the rise and legitimisation of populist right-wing and Islamophobic movements. Moreover, the fact that both right-wing and Islamist extremist movements use the existence of one another to justify violent actions based on religious identity makes them increasingly dangerous.

Within such a context, Arab Gulf efforts to curb religious extremism by promoting cross-societal interaction at all levels and involving all ethnic and religious groups living in the same country should be supported and encouraged, and should further serve as an example for Western nations whose societies have become increasingly polarised.

Antonino Occhiuto is an analyst at the Euro-Gulf Information Centre, an initiative that aims to build social, political, strategic, cultural and economic bridges between the people of Europe and the Arabian Gulf based in Rome