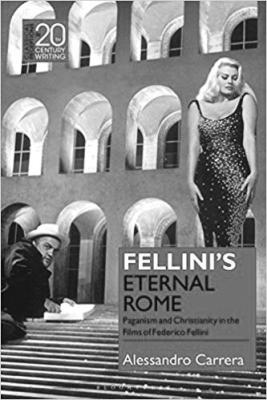 ROME - A journalist friend in Rome who admired Federico Fellini wanted to write a book about him and got his agreement.  But after a series of broken appointments followed by improbable excuses, accounts of events which differed each time Fellini told them and annoying lies, my friend abandoned the project and concluded Fellini was as elusive as an eel.

It may have been an advantage for Alessandro Carrera that he met Fellini only once when, with others, they shared a dinner table.  But before he could ask any questions, Fellini was called away to eat with a potential financier of a film. Carrera’s book concentrates not on the man but on his films.

An Italian who teaches at the University of Houston, in Texas, Carrera has produced a brilliant essay which analyses several of Fellini’s famous scenes, such as that of the cardinals’ fashion show in Roma or that of a Christ statue dangling from a helicopter as it skims over Rome, while briskly setting the films in a cultural context ranging from Sigmund Freud to Jacques Lacan,  from Alberto Moravia to Pier Paolo Pasolini.  At times, however, he seems to be straining to meet the requirements of a new series, inaugurated by this book, to probe the relations of contemporary writers with classical Greek and Roman culture.

Its companion volume is on Virginia Woolf, but Fellini was not a novelist or poet. Carrera sees as a major influence Dante, who came centuries after the ancient classics, although he is a gateway to Virgil, Ovid and their world. Admittedly Fellini based his Satyricon loosely on the work by Petronius, and Fellini made his own interpretation a classic written in marble.

Carrera claims as a central theme a Catholicism still rivalled by paganism.  Fellini’s films suggest the Italian penchant for saints and miracles has a pre-Christian tinge. With his master Roberto Rossellini, Fellini made three early films on Franciscan Catholicism which he obviously preferred to its current Counter-Reformation version.

But was Catholicism as important a theme for him as what Carrera calls the “inability of male fantasy to catch up with male desire”? Time and again in Fellini's sketchbook, viragos with bloated breasts and luxuriant pubic hair both entice and frighten. An underlying message of many films was a severe assessment of Italian males, often played by Fellini’s handsome alter ego, Marcello Mastroianni who once said, “the Fellini man is impotent.”

Fellini, who was born in Rimini  on the Adriatic coast in 1920, came to Rome to study law in 1939 but swiftly abandoned it for journalism, writing and sketching for a satirical fortnightly. He had a life-long love of comics and cartoons and, when the Americans liberated Rome, opened a shop called ‘Funny Faces’ where he sold his caricatures, often of US troops.  He worked in radio, then wrote film scripts.  He saw film directors as “rulers of a nasty reign of chaos and noise” but became one who fitted this description himself. Making all the world a wistful circus in which misfits might glimpse beatitudes, he steered Italian cinema away from the neo-realism which had made its post-war reputation.  His best films, such as La Dolce Vita and Amarcord, attracted large audiences even though they could be considered art films. The adjective ‘Fellinian’ became a synonym for strange and beautiful.  At times the films were prophetic: far earlier than most, in works such as Orchestra Rehearsal and Ginger and Fred, he spotted the self-destruction beneath Italy’s surface glitter.

Fellini married Giulietta Masina, an image of elfin innocence in several of his films, who became a sagacious Agony Aunt for a daily newspaper. He died the day after their fiftieth wedding anniversary. But Fellini had long- term lovers and one-night stands, as with Germaine Greer whose verdict was “sexual athletes are tuppence a dozen. Fellini was a many-sided genius.  I do not hope to meet his like again.”

Carrera provides glimpses of the man praised by some for his tenderness and humour but decried also as a pathological liar, a “vampire” who did not give collaborators their due, and an ignorant provincial.

At times Fellini agreed with his critics.  The protagonist of his film Casanova met disapproval as a cold fish and Fellini responded that of course the libertine was cold, adding that he himself was Casanova and, for good measure, Pinocchio.  When Rossellini, perhaps jealous of the success of his one- time assistant, called La Dolce Vita the film of a provincial, Fellini turned it into praise:  “…the no man’s land that I call provincial, (is) the frontier between the world of the senses and the suprasensible world, that is truly the artist’s kingdom.”

In La Dolce Vita, Fellini provided a negative image of an intellectual, Steiner, who eventually commits suicide. Fellini did not like people with too many ready answers because he had found that life meant suspended questions. He was a searcher involved with the occult, he experimented once with LSD under medical supervision, and underwent Jungian psychoanalysis which led to an annotated, sketchbook diary of his dreams. Often, they were nightmares – one has him arriving at his office letter box which is labelled: The Most Lost of All the Lost.

Unlike some of his fellow artists, Fellini was not a ready signer of protests – perhaps his only campaign was that against advertisements interrupting films on television which added pathos to the fact that, towards the end of his life when he could not raise money for his film projects, he made TV advertisements for a bank.

He was reluctant to speak in public but, when he did so, could be blunt (“I can’t stand Humphrey Bogart – no one can be pissed-off all the time”) or subtle and ironic: “I’m a craftsman with nothing to say but know how to say it.”

I suspect that Fellini, who always preferred specifics to generalisations, hid behind a smoke screen of reticence and lies to protect his creativity. He would probably be wary of this analytical book, but it stimulates readers to a new appreciation of Fellini’s films at 25 years from his death.

The reviewer is not the Desmond O’Grady who was in the Steiner scene of La Dolce Vita.