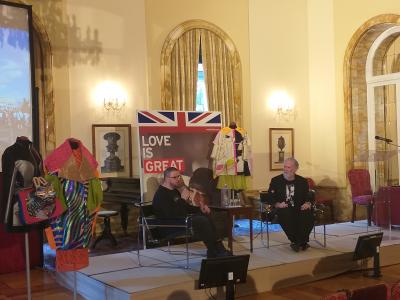 The event took place May 21 at the Villa Wolkonsky

ROME – The British embassy hosted an event on Tuesday celebrating the revolutionary role of fashion and highlighting its support for the LGBT campaign, Love is GREAT. Speakers at the event discussed amongst other things miniskirts in women's emancipation and the right of the Roman LGBT community to express itself without fear, as Rome gears up for its annual gay pride celebration in June.

The event, in the form of a discussion named “The Aesthetic of Revolution” and held at Villa Wolkonsky, was part of the UK's campaign to promote LGBT rights worldwide.

Director of Education at the Academia di Costume & Moda  Adrien Roberts and Stefano Mastropaolo, from the Circolo di Cultura Omosessuale Mario Mieli, shed light on how changes in fashion in the past 50 years have both reflected and stimulated changes to society, starting with Mary Quant’s invention, the miniskirt.

Quant’s invention, inspired by the aspirations of young women in London in the early 1960’s, set fire to women’s growing desire to break away from stereotypes about housewives of that time. The miniskirt, which came in the same decade as the contraceptive pill, represented an increasing control over their own bodies to many women. As such, it was an important symbol of the feminist movement in England.

For Roberts, fashion and social transformation can never be separated: “Clothes are a mirror to what is happening in society, but we can also stimulate society and create reaction by what we are wearing. When we are unhappy, we have a revolution and wear the revolution,” he said.

The British ambassador to Italy Jill Morris, who participated in the event, contributed to the discussion by highlighting the ground-breaking introduction of unisex clothes to the fashion industry.

“Before, it was hard for women to participate in certain activities as their clothes restricted and limited their behaviour. The creation of a unisex collection revolutionised how women express themselves and the roles they play in society,” she stated.

“The importance of costume goes beyond aesthetics. The fashion industry speaks to our values and through fashion we can express our values, personalities and individual natures,” Morris told the Insider.

The Love is GREAT campaign was launched in the UK in 2014 to welcome the legalisation of same-sex marriage in England, Scotland and Wales. It is an initiative of VisitBritain, the agency responsible for promoting tourism in Britain.

The campaign is not restricted to the UK and has advocated for diversity, equality and LGBT rights all over the world. In 2018, the British Embassy in Italy embraced the campaign for the first time with a discussion on the transformative impacts of music.

Like last year’s event, the discussion at Villa Wolkonsky came in anticipation of the Roma Pride parade, which the British embassy also actively supports.

“The British embassy has been participating for a number of years in the Roma Pride. It is very important for our foreign policy that we champion and promote equal rights,” said Morris.

The UK has emerged as a strong advocate for the rights of the LGBT community. Only this year Transport for London (TfL), the company responsible for public transport in London, banned adverts from at least 12 countries which lack LGBT rights, from which six still impose the death penalty for gay sex.

“We have a big campaign all around the world saying that everybody has the same right to the same freedoms, and the same right to express themselves without fear. That is what we will be celebrating and championing when we are at Roma Pride,” Morris added.

Roma Pride will have its 25th edition on the 8th of June at the Piazza della Republica at 3 p.m., with a float of the British embassy for the second consecutive year. 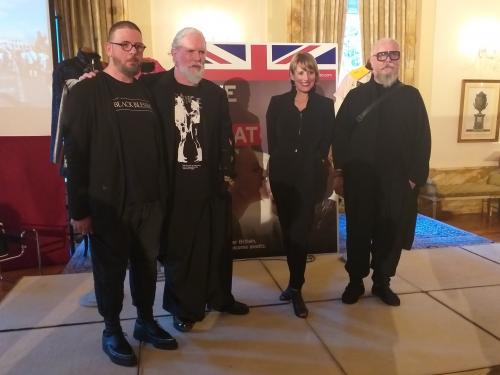