The dilemma faced by Italo-British nationals in EU elections 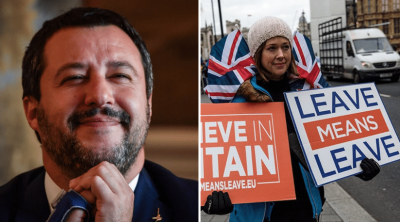 ROME - Italo-British nationals, or expats living abroad in either country, face a momentous decision in the coming European elections: vote against Brexit and let Salvini’s League go unchallenged, or vote against the nascent populist movement and see Britain crash out of the EU without a fight.

As put forward by Enrico Franceschini in an article for La Repubblica, these elections embody the hardest decision that Italians and Brits living abroad have had to face since the European Union’s official founding in Maastricht in 1993.

Should they choose to vote in the UK, Italians will have the choice between any of the four parties that have positioned themselves as vehement opponents of Brexit: the Liberal Democrats, the Green Party, the Scottish National Party, and the recently formed Change UK. Given the unparalleled success of Nigel Farage’s newly formed Brexit party, predicted to take circa 37 per cent of the votes, a strong pro-EU voter turnout is needed if, to quote the Liberal Democrats, the UK is to say “Bollocks to Brexit.”

Even a vote for Labour’s shadow government could prove fruitful in stopping Britain’s imminent exit from the EU as the party remains sat on the fence as to the possibility of a second referendum, and deputy leader Tom Watson is a strong advocate of enforcing this decision.

However, casting one’s ballot paper in the UK would mean one less vote against Salvini’s seemingly unstoppable rise in the Italian polls. The deputy prime minister may have entered government as the smaller of the two coalition parties, but his League have been on a relentless popularity rise since and now top the polls by around 10 per cent.

Salvini has concurrently become the figurehead of a new populist alliance, that includes the likes of Orban’s Hungary and Le Pen’s supporters in France, set to make the largest gains of any group in this year’s EU elections. His rhetoric has verged on anti-EU, is strongly anti-migrant, and he has been accused of creating a culture of fear, hatred and racism on multiple occasions.

The choice, as Franceschini proposes in his article, boils down to a lesser of two evils. What is worse, “the greatest threat every faced by a united Europe in its history” or “the sovereignist, populist, neo-fascist winds blowing in Italy.” Put into Shakesperian terms, voters will have to choose whether "to be" or "not to be". Tough call.

The UK will head to the ballot box on Thursday, May 23 while Italy will follow suit on Sunday, May 26.