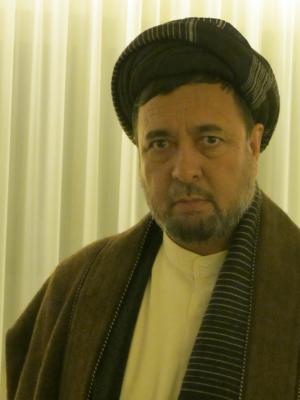 ROME -- Former mujahedin leader and current Afghan Parliamentary Justice Commission chief Hajji Mohammad Mohaqiq visited Rome recently at the invitation of the Afghan community in Italy. Ostensibly the trip was to commemorate the death of the Afghan Shia leader Mazari, but he was to have made use of the occasion to meet with a number of institutional figures on Capitoline Hill, including Rome’s mayor, Gianni Alemanno. However, the outcry sparked by the Italian group CISDA (which works for women’s rights in Afghanistan) and accusations that it was  ‘’an initiative to legitimise one of the worst war criminals’’ in Afghanistan, resulted in the round table discussion being called off.

After playing a major part in the anti-Soviet struggle in Afghanistan, Hezb-e Wahdat leader Mohaqiq was one of the few mujahedin leaders to remain in the country throughout the Taliban regime. In leading the Hazara ethnic group’s resistance, his forces committed numerous atrocities for which they have yet to be held accountable, and the blanket amnesty that he and the other former mujahedin leaders granted themselves in Parliament in 2007 for past crimes has long festered as a source of resentment and contention. Appointed Vice President and Planning Minister in the interim period after the fall of the Taliban, he came in third in the 2004 presidential elections and commands a large following, especially among the third largest and historically most discriminated against ethnic group in the country, the Hazaras. He is also currently a Member of Parliament and heads the latter’s Justice Commission.

In an interview with the Italian Insider, Mohaqiq spoke on the recent killings by a US soldier in the Panjwai district, the discrimination Hazaras continue to face in the country and the coalition he formed at the end of last year alongside leaders from the Tajik and Uzbek communities. He also criticized the strategy used by foreign forces so far and implied that the Ulema Council – far from exerting pressure on Karzai - acted as the latter’s ‘’mouthpiece’’.

On the recent, horrific attack in the country’s southern Kandahar region on Afghan civilians in which 16 men, women and children were killed by a US soldier allegedly acting alone, Mohaqiq noted that he had not been in the country at the time of the attack and did not have sufficient information to comment on it. However, what he believes to be of paramount importance is that the trial be transparent; whether the proceedings take place on Afghan or US soil is of little consequence.

‘’These things happen to soldiers in lengthy wars,’’ he said, criticizing instead the errors made by the administration and NATO leading to the current situation. ‘’The problem is that the enemy was never clearly defined by the foreign forces and Karzai. Those responsible were caught, but instead of punishment they were called ‘brothers’ and given money.’’

He also criticized the Afghan National Army (ANA), saying that although Hazaras account for  ‘’20 percent’’ of the population, they constitute only a miniscule ‘’2 percent’’ of the ANA (author’s note: according to the Brookings Institute’s Afghanistan Index published on January 30, 2012, the respective figures are instead 9 percent and 10 percent. http://www.brookings.edu/~/media/Files/Programs/FP/afghanistan%20index/i... ).

‘’Most Hazaras cannot get jobs, and are virtually excluded from programmes integrating them into the security forces. And so you’ll see them lined up along the road, hoping to get taken on as day workers.’’ He cited this as the cause of the predominance of asylum seekers from the Hazara ethnic minority in such places as Italy, as the only hope for some is to go abroad.

The joining of forces in late 2011 under Mohaqiq, the Tajik Ahmed Zia Massoud (brother of the famed Northern Alliance leader Massoud, whose image as ‘national hero’ remains omnipresent in the northern parts of the country but is anathema to many southern Pashtuns), and the Uzbek Abdul Rashid Dostum is generally seen as a sort of ‘’reformation’’ of the Northern Alliance, which in 2001 removed the Taliban with the help of US air power. With significant forces still under their command, the alliance - the National Front of Afghanistan (NFA) - is staunchly opposed to a return to power of the Taliban. While Mohaqiq said the coalition had been formed in response to growing fears among the populace of an impending civil war, a Pashtun in the Afghan capital instead said he saw it as the ‘’sign that one was already beginning’’.

Following the Berlin Conference marking the ten-year anniversary of the fall of the Taliban, the founding members of NFA alongside former Afghan intelligence service NDS director Amrullah Saleh signed a statement denouncing a possible secret agreement between the US, the Taliban and Pakistan allegedly consenting to cooperation between the three. The National Front Berlin Statement called for national dialogue on constitutional revision aiming at decentralization, and a shift from the current presidential system to a parliamentary one. It also lashed out at the negotiations with the Taliban, noting that they ‘’fail to take into account the risks, sacrifices and legitimate interests of the Afghans who ended the brutal oppression of all Afghans.’’

When questioned about the recent ‘’code of conduct’’ issued by the Ulema Council (a 150-member body of religious leaders gathering to advise Karzai on a regular basis) about three weeks ago, he said that Karzai uses the council to say what he personally would like to but does not want the blame for.  The ‘’code’’ states that ‘’men are fundamental and women are secondary’’, ordering women to avoid travelling without a male guardian and mingling with men (in offices, schools, markets, etc.) and to allow their husbands more than one wife, as well as confirming the right of men to use force against their spouses for reasons in line with the Sharia. It has seemingly met with Karzai’s endorsement.

When asked about the Shia family code (most Hazaras are Shia, most Pashtuns Sunni) approved by Karzai in 2009 - which requires wives to submit to their husbands sexually, allowing the latter to not feed their wives should they refuse - Mohaqiq simply said that family codes differ among religious groups within the same country ‘’all over the world’’. When pressed, the only comment he chose to make was that while ‘’Sunni family laws stay the same’’, Shia ones ‘’evolve in line with the times’’.

At a dinner with roughly 25 members of the Afghan community in Italy, some coming from as far away as Venice and Padua to be present, there were a number of Afghans who had started out in the country as ‘’illegal immigrants’’ but now had restaurants, businesses, etc. Nevertheless, all noted that many of their fellow countrymen were sleeping on the streets and trying to get to northern European countries. None knew any Afghan woman who had requested asylum, as the journey most of them had taken was too ‘’long and arduous’’ for them, and the number of Afghan women in Italy due to ricongiungimento familiare (permits granted to the relatives of those legally residing in Italy) could be ‘’counted on one hand’’ across the country.

One had also been involved in mediation efforts to secure the release of Italian photographer Gabriele Torsello in 2006, which led to so many death threats that he was offered asylum in Italy. His family, however, remains in Afghanistan and has been forced to move a number of times out of concerns for its own safety. After his 10-year-old brother suffered a beating on his way home from school which resulted in a number of bone fractures, his family is now living in a small, isolated village where his four brothers and sisters can no longer attend school. He is Hazara, as were the vast majority (if not all) of those invited.

During the question and answer session Mohaqiq held before and after the dinner, the Hezb-e Wahdat leader proffered words of calm and hope to those present, stressing that ‘’time is needed’’. Faced with the thinly-veiled anger of one participant who noted discrimination in the new Afghan electronic IDs, in which the top language is Pashto, the one below English and only the one at the bottom in Dari (the language most commonly used by Tajiks, Uzbeks and Hazaras, who together are thought to constitute approximately 50 percent of the population), Mohaqiq simply said that these issues are being worked on. 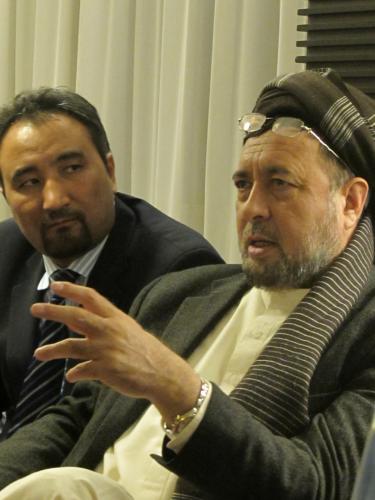