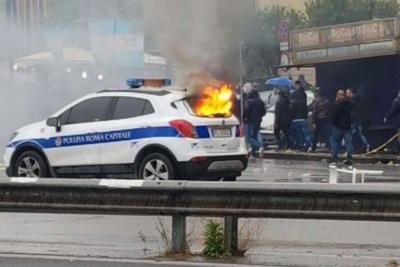 Lazio fans set a police car on fire and threw stones and Molotov cocktails outside the stadium before the game. Photo credit: AdnKronos

ROME - Lazio struck twice in the closing stages of a breath-taking Coppa Italia final against Atalanta to seal a 2-0 victory in a match marred by violence before the game that saw five Lazio supporters arrested.

Quick-fire goals from Sergej Milinković-Savić and Joaquín Correa ultimately proved enough to see off a strong Atalanta side and bring home a seventh Coppa Italia for the Biancocelesti, much to the delight of the 40,000 home supporters packed into the Stadio Olimpico.

Lazio celebrations, however, were rather dampened by the actions of a select group of supporters before the game even kicked off. Multiple molotov cocktails were thrown by fans outside the stadium, leaving a police officer injured and setting a police car on fire.

“I was hit… by a Molotov cocktail. Right on my ear, I’m bleeding. We were surrounded and they threw all sorts of things at the car… the seats caught fire, we had to flee,” Ugo Esposito, the injured officer, told press as he was waiting to be receive treatment in hospital after the event.

The actions of the Lazio fans drew sharp criticism from authorities, Rome’s Mayor Virginia Raggi comparing those culpable of the event to Barbarians.

Violence aside, Atalanta also left the fixture feeling aggrieved, knowing that things could have been very different had VAR intervened in the game’s most controversial moment. Marten de Roon had a glorious opportunity to put the Bergamo outfit ahead, however his on-target effort was deflected onto the post by the arm of defender Bastos, who was on a yellow card at the time.

None of the match officials spotted the incident, and VAR inexplicably decided not to intervene leaving Atalanta manager Gian Piero Gasperini seething. “Are we meant to only use VAR when it’s hand? It was a penalty and a red card,” the Italian said. “This is a scandal! Tell me why it happened? Give me some justification.”

Atalanta, who have not won a trophy since 1963, will now regroup to ensure they seal their fourth-place position, a result that will see them qualify for the Champions League and cap off a very strong season. 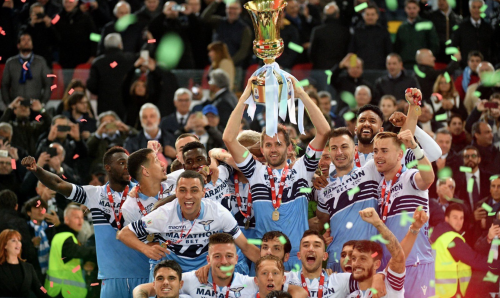