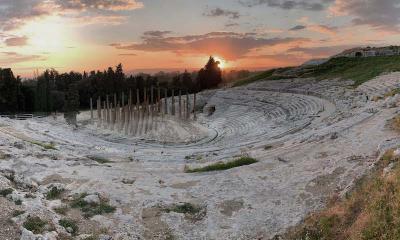 Boeri came to fame in 2014 when he designed the so-called Bosco Verticale, a multi-award winning pair of residential towers in his home city, which house some 900 trees on a series of terraces. He has now, for the first time, turned his distinctive, innovative style to the theatre, designing the set for Euripides’ Trojan Women. In giving the production an environmental twist, he has reformed and modernised the most ancient of dramatic traditions.

Trojan Women, directed by Muriel Mayette-Holtz and translated beautifully into Italian by Alessandro Grilli,is performed this year at the festival of Greek drama held annually, since 1914, by the Istituto del Drama Antico in the original Greek theatre at Syracuse. A Greek play is staged in the warm twilight and into the night daily every May and June.

This production provides the audience above all with a visual feast. As the sun sets, shadows steadily climb the forms of the 100 or so dead and mutilated tree trunks which constitute the backdrop to Boeri’s set. With loud explosions which had members of the audience screaming in shock, the ancient play springs to life and unravels the deep tragedy of its archaic plot.

The theatre, which is some 24 centuries old, rings out with the lamentations of the women of Troy and the musical odes which the chorus sing in unison (music by Cyril Giroux). In Euripides’ play, we hear of the varied but uniformly grim fates of the female protagonists in the aftermath of the Trojan war. Drawing on old myth, newer stories recorded by other poets and his own vivid imagination, the fifth century playwright explores the chiaroscuro of emotions and reactions on the part of the women as they are told what will become of them.

Hecuba (played by Maddalena Crippa), the old queen of Troy, mother to a host of murdered sons and former wife of king Priam, is on-stage throughout. She is joined by a chorus of the ordinary women of Troy, and in turn by three women: her mad daughter Cassandra (Marial Bajma Riva), who can tell the future but is cursed never to be believed; her daughter-in-law Andromache (Elena Arvigo), whose son Astyanax (Riccardo Scalia) is sentenced to death before her in what is really the dramatic climax of the play; and finally by Helen (Viola Graziosi), the original cause of war and now despised by the other women.

There is of course a lot of interest in the play itself. Historians wonder what it tells us about Athenian attitudes to war, composed as it was in the midst of one, or about Greek attitudes to women and gender roles. Certainly this is no celebration of war or of men. But Greek tragedy has as its subject suffering which is inevitable.  This play is different because the various judgements which come from the off-stage male sphere take on a role which in other tragedies might be occupied by the gods.

Indeed, for all the material which appeals to scholars of ancient Greece, there is a sense in which this is a difficult play. It is relentless in its suffering, sometimes static and the lamentations for the destinies which we ultimately know from the get-go can seem repetitive. This may have been something the original Athenian audience recognised, since the play came second out of three in its first performance, which was also a dramatic competition. The influential nineteenth century German critic A. W. Schlegel famously remarked that he found the ‘‘accumulation of helpless suffering’’ wearisome to the point of exhaustion, and it was an attitude which scholars have followed until quite recently.

Strangely, the modern production at Syracuse reflects how this specific tragedy could have failed to hit the mark in two contradictory ways. On the one hand, the inevitable march of the gloomy plot creates little tension. Greek tragedy at its best involves dramatic reversals of fortune, as Aristotle recognised, as well the opportunity for hard justice in compensation and a more positive nobility for those who must suffer. Trojan Women offers the former pair not-at-all and the latter, nobility, in the thinnest slither only for those who are searching for it.

On the other hand, the timing of the audience’s spontaneous clapping was often quite inappropriate, if not downright insensitive to the material (and sometimes quite funny). Were they following the same plot as this reviewer? Did they not realise when they burst into applause at the end of Hecuba’s speech, as she tried to ensure that Agamemnon would put his former wife Helen to death when they return to Greece, that she had just argued that all faithless women should be stoned to death? If there were potential problems in the original play, there were also potential problems with the modern audience.

In a sense herein lies the fundamental challenge to those who advocate contemporary productions of Greek drama: how can a text which is so deeply alien to modern sensibilities be made relevant? How can an art form which assumes that it is better not to be born, since life is only suffering and that the best you can hope for is justice (if that), be made to appeal to an audience such as its Sicilian one, steeped as it is in the Judaeo-Christian tradition where justice is fundamental to the order of the cosmos, and in Enlightenment values where history progresses?

Stefano Boeri’s set is one such way. Transporting trees which were felled in the enormous Vaia storm last October, from Friuli and Veneto to Sicily, Boeri has built a backdrop to the stage, where the traditional orchestra and raised skene are all on one level, which represents a forest. Behind it rise up the real woods of Sicily, a living backdrop to the dead forest on-stage. The cast emerges from the foliage and periodically sinks back into it.

The Milanese architect has done two things which radically change the way Greek tragedy functions. Firstly, he has moved the setting from an urban one to a natural one. Greek tragedy, conforming to the humanist reputation that Greek culture later acquired, dealt primarily with mankind at home and in society, albeit with the natural world of the gods imposing multifarious tragedies from above. His new, natural setting paves the way for a second, more radical change.

Boeri spoke to me of the relevance of man’s folly, which has continued for over two millennia. But his theme is not really folly in war, which was Euripides’. His is the environment and man’s collective destruction of their natural world, of which Storm Vaia was one reflection, a consequence of rapid climate change from human activity.

This, then, was perhaps what the audience’s evident enjoyment of the production reflected: a recognition that they shared, to some extent, the predicament of the Trojan women. G K Chesterton said of the archetypal Greek art form, “A tragedy means always a man’s struggle with that which is stronger than man.” But in both cases, our modern lot and in Trojan Women, the horror is unique and to some extent different to typical tragedies.

What Boeri does is show us that the challenge we face in the form of climate change is parallel to that in Euripides’ terrible vision of war and suffering. In both cases, the causes of suffering are man-made and to that extent avoidable. We can recognise in the plight of the women of Troy our own ghastly (but not so unique) predicament.

To paraphrase Percy Shelley, tragedy is meant to allow us to take some pleasure from pain. Boeri’s masterful update to the ancient story (not to mention the beauty of his creation) may add to the pain by bringing it home, but it certainly adds to the pleasure too. 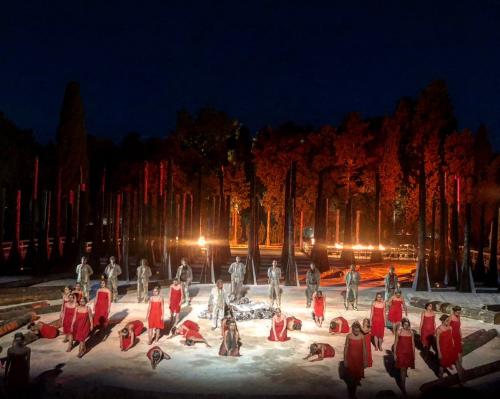