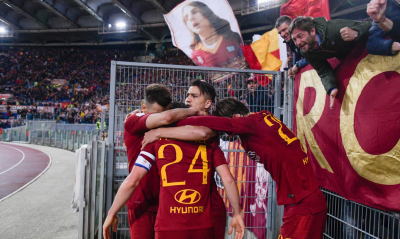 ROME - Claudio Ranieri’s AS Roma inflicted only a third defeat of the season on Juventus, beating the Bianconeri 2-0 to at the Stadio Olimpico to keep their hopes of Champions League football alive.

While Roma were lucky to still be in the game by the time they broke the deadlock, a string of good fortune and stunning saves from goalkeeper Antonio Mirante keeping the scores level, two goals in the final 12 minutes of the game gave all three points to the home side.

Captain Alessandro Florenzi put Roma ahead in the 79th minute, before veteran forward Edin Dzecko sealed the result in extra time, finishing off a sweeping counter-attack move as Juventus pushed for a late equaliser.

The result leaves Roma in sixth place, tied on points with AC Milan and only one win away from Champions League football next season. With games against Sassuolo and Parma to come, Ranieri’s men will be confident of taking maximum points from both encounters but will now have to rely on teams above them slipping up if they are to claim fourth spot.

Milan too have an easy run-in with fixtures against already relegated Frosinone and SPAL. Atalanta in third have Juventus and Sassuolo to come, while Inter in fourth are yet to play Chievo, Napoli and Empoli.