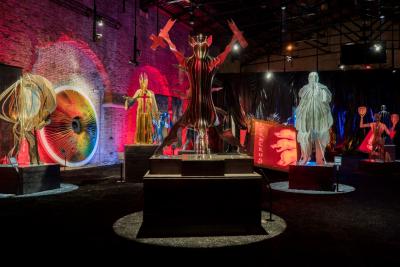 VENICE – IF you are after the subtle and nuanced, rather than the didactic and simplified, you will be disappointed by the exhibition in Tesa 94 at this year’s Biennale.

“You will now meet 22 human sins. Having studied these sins, you will possibly diminish yours, and it will become easier for you to fight your evil inclinations, since every human being is made of good and bad.” These are the words you will hear as you enter this slightly surreal warehouse through a dark tunnel, masked figures on either side, smoke billowing from the floor and punctuated by red lights.

“In Dante Veritas” is the most recent contribution to the art world of Vasily Klyukin, the Russian businessman-turned-artist who counts among his collectors Leonardo DiCaprio, Charles Saatchi, Sir Leonard Blavatnik and Albert II Prince of Monaco. The exhibition runs May 8 to Nov 26 in the Arsenale Nord and is free to attend.

If you are lucky you might meet the intriguing Klyukin himself. Born Moscow and now 46-years old, he made his fortune in real-estate and banking before retiring to Monaco to pursue sculpture and design. His first exhibition was in 2014, his unique style soon turned heads in the art world and this, his first solo exhibition, saw some 200,000 visitors in Moscow before it came to Venice.

The work is based on Dante Alighieri’s Divina Commedia, written between 1308 and 1320. So Klyukin’s model came from a world a little different to the Russian’s own. Dante’s great work both enshrines a medieval Christian worldview, which can at times feel utterly alien, and reflects the rich and vivid imagination of one of the finest poets in the Western cannon.

Klyukin is undaunted by the prospect of living up to this artistic exemplum. Creating his own nine circles of hell, visitors are guided past 32 steel statues, of which most are the sins of the medieval Christian world – Anger, Lust, Gluttony, Perjury and the so on. Like the damned souls of Dante’s work led by the Roman poet Virgil on their way to eternal damnation, we are led through a multimedia exhibition of remarkable ambition, of sculpture, digital art, performance, video and light-boxes.

But instead of being led by the most renowned pagan poet of Antiquity, we are led by Klyukin’s audio-guide. And instead of meeting with the Four Horseman of the Apocalypse, harbingers of the End of Days in the Christian story, we meet with Klyukin’s new horsemen: Overpopulation, Misinformation, Extermination, and Pollution.

Klyukin’s vision is of course very different to Dante’s, but his choice of new sins is nevertheless disappointing. To be sure, their presentation is impressive, in the form of personified statues standing some 3.5 metres tall, but the captions occasionally hint at a lack of depth in these, the replacements of the ultimate evils of the medieval world.

“The true Plague of our times. The more people there are on the planet, the more food, resources, and territory we require, and the more waste we produce,” we read below the statue of Overpopulation. On a very basic level this might be true, but it’s not without its problems and it’s not self-evident. Overpopulation is a major issue, but it is also complex, diverse and hotly debated.

Klyukin is guilty of using out-of-context medieval Christian values to transmit simplified messages for an audience of today. The success of this exhibition will rest largely on how much the audience is willing to take at face value what he tells them, and how much they’re willing to cherry-pick lessons from the Dante’s fourteenth century world.

Experience might suggest little is more enjoyable to a modern audience than self-flagellation. Many visitors will take a perverse satisfaction from acknowledging just how sinful they are, whether to lament this or to flaunt it. When I was there, many seemed to be relishing the opportunity to write the names of those who had wronged them on the wall of the Betrayal section of the exhibition, as the artist requests.

But the visit for me was above all a reminder of just how alien Dante’s world is to our own, interconnected one. His sins were about the relation of a Christian soul to God. Klyukin’s are the sins of humanity as it faces the reality of existential threat, caused by its own collective actions. Are the medieval Christian sins the right way to think about the challenges we face now? And is Dante’s vision of hell, exotic and bewildering as it is, a realistic way to envisage our own age?

And yet, historical sensitivity may be a luxury we can’t afford. Collective sin requires collective redemption. If Klyukin’s work takes us one step closer to that, perhaps this sort of moralising broadcast and collective chastisement, dumbed down for our own times, is exactly what is required. 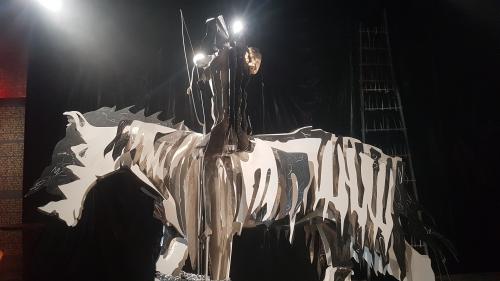