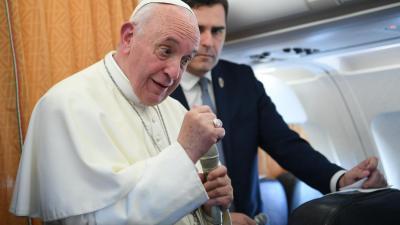 SKOPJE – Pope Francis called for respect between peoples and insisted that this is still possible in today’s world, in an interview on his return from North Macedonia and Bulgaria.

Speaking to journalists on board the papal aeroplane, 'Il Papa' explained: “We live in a world in which insults rule, but respect between peoples is still possible.”

In the press conference, he paid his respects to Jean Vanier, the Canadian Catholic philosopher who died on May 7, and spoke about his respect for North Macedonia and Bulgaria, which he considers very different countries. He went on to discuss the relations between the Catholic church and the various national Orthodox churches.

“In general, the relationships are good. I have met among the patriarchs men of God, and I have also found among them brothers.” The Bulgarian Orthodox Church had rejected the offer of holding joint prayers with him in what was considered by many a symbolic rejection of healing the Schism between the denominations.

When asked about the canonisation of Cardinal Stepinac, the Archbishop of Zagreb from 1937 until his death in 1960, to which the Serbian church is opposed, he replied: “The canonisation of Sepinac is a historic case. He is a virtuous man and he has been proclaimed Blessed, but the process of canonisation is still unclear on certain points, on historic points.” He pointed out that he was working with Irenei, a patriarch of Serbia, and a commission has been set up to look into the matter.

Pope Francis, 82, was asked about his energy on foreign trips: “When I’m in a country, I forget everything. During my trips, I don’t feel tired. From where do I get this strength? From God, perhaps.”

The pope was returning from three-days in the Balkans, in which had had urged Bulgaria to accept more refugees. He finished the visit in Skopje, North Macedonia, where his presence symbolically important for the small Christian community there and for the national as a whole.

Macedonia was renamed North Macedonia in February, ending a long dispute with Greece over the name. And with NATO membership expected by the end of the year, North Macedonia hopes to end three decades of international isolation, since independence from Yugoslavia in 1991.