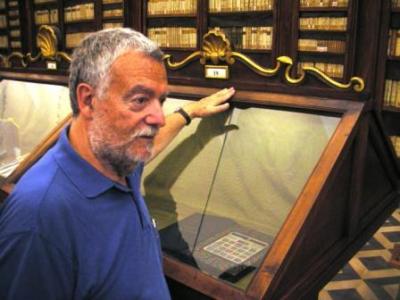 Drawing on his own work from 2007 to the present day, Tiberti’s investigation into the unavoidable anxiety that humans feel makes use of installations, performance art, videos and photography.

Burton was born in 1577 in Leicestershire, England but spent most of his life as a fellow of Christ Church college, Oxford. He is best known for his “The Anatomy of Melancholy,” which later became a classic work of English literature.

For much of his life he suffered from depression, and may have eventually hanged himself. Both his personal experiences and his studies, which were often in mathematics and astrology, informed the work of 1621.

Tiberti is keen to echo what he sees as Burton’s demand for interpretation and audience-reader participation in his work. In his own words, TIberti is “like Burton, who confesses to us and who at the same time makes us the object of his work." Tiberti through his art “lives the hermeticism of the hidden message.” He transforms the visitor through an initiatory journey into “a new architect, both involved and participatory.”

The exhibition takes the form of a research trail in TIberti’s office-workshop in the via Casilina Vecchia. It runs alongside Open House Roma, May 11-12, which areas of the city with architectural significance are opened up free to the public.

Burton’s work received much praise from later critics from Samuel Johnson, who declared it one of his favourite books, to Anthony Burgess, who said that Burton – unlike most modern authors – never bored him.