Atalanta capitalise on rivals’ slip-ups to pull away 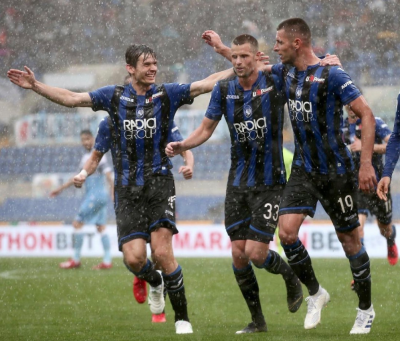 Atalanta celebrate their third goal away to Lazio. Photo credit: Atalanta BC

ROME - Atalanta came from behind to beat Lazio away from home and capitalise on points dropped by their closest rivals to move three points clear in fourth place and one step closer towards Champions League football next season.

Atalanta went into the match off the back of an electric recent run of form. A 2-1 win away at second-placed Napoli before comfortably beating Udinese at home had seen the Bergamo outfit move into the Champions League spots as rivals faltered.

Atalanta knew that victory over Felipe Inzaghi’s men at the Stadio Olimpico would all but see off any chance of a late challenge for fourth place by the Rome-based side and go some way to bolstering their own ambitions for it.

The away side were left with it all to do early on, though, as Lazio’s Marco Parolo put the home team ahead less than three minutes in.

However, this early setback did little to dampen Atalanta’s mood and they were level going into the break thanks to prolific forward Duván Zapata who beat the offside trap in the 22nd minute to coolly slot home for his 22nd goal of the season.

A goal for Timothy Castagne, after Lazio’s defence was ripped open by a stunning counter attach, and a late own goal by Lazio’s Wallace were enough for Atalanta to take the three points. The two sides will meet again on May 15 for the Coppa Italia final.

Like their city rivals, Roma too slipped up on a chance to keep the pressure on in the hunt for Champions League qualification. Claudio Ranieri’s men looked to have sealed the game with eight minutes left on the clock when Stephan El Shaarawy broke the deadlock with a wonderful back post volley.

Genoa, however, had other ideas and a Cristian Romero header from a set piece found the back of the net and snatched a late point for the home side. The result leaves Roma three points off Atalanta in fifth and under serious pressure if they are to avoid Europa League football.

Inter, too, are now under pressure from the Bergamo side and risk being dragged into a qualification scrap they seemed all but free from a matter of weeks ago.

A 0-0 draw at home to Udinese marked their fourth draw in five games and leaves them just one point above Atalanta in third.

Napoli capitalised on Inter’s slip-up to seal second place with a 2-1 victory over Cagliari. Despite being 1-0 down to Cagliari with five minutes left on the clock, a Dries Mertens equaliser gave the home side renewed confidence before Lorenzo Insigne dispatched a penalty eight minutes into extra time to snatch the three points at the death.

Carlo Ancelotti’s men will be glad to have secured second place, however it will be little consolation in a season of disappointment and missed opportunities for a very talented side who will undoubtedly bounce back next season.

Juventus, too, relied on their star performers to salvage a result from their game, Cristiano Ronaldo scoring with six minutes left to equalise against Torino in the city derby. Torino will have been devastated not to hold out for the win, however European football is still very much on the cards for them with only three games left to play.

Elsewhere, SPAL beat Chievo 4-0, Sampdoria drew away to Parma 3-3 in a game marred by a red card apiece for the two teams in the dying moments of the fixture, Sassuolo were held to a 2-2 draw by Frosinone, while Empoli beat Fiorentina 1-0.