Exhibition giving refugees a voice to open in Venice 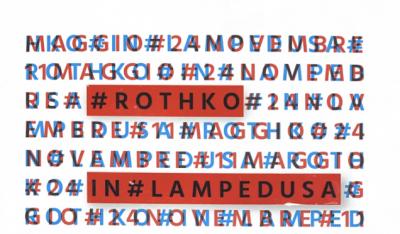 ROME - The United Nations Refugee Agency has unveiled Rothko in Lampedusa, a new cultural project that aims to promote the artistic talent of refugees and shed light on the current migration crisis, which will open in Venice this month.

Set to run from May 11 to November 24, Rothko in Lampedusa will exhibit the works of eight established artists, amongst which Ai Weiwei, for whom migration and displacement are either a personal experience or an artistic focus.

The project will also exhibit the work of five emerging artists all of whom are currently refugees. These five will spend a month in Venice in order to gain international exposure and help advance their artistic careers.

Speaking at the Foreign Press Association in Rome, project curator Luca Berta said: “The fundamental idea behind the project is to give a voice to artists who up until now have not had the opportunity that artists in different situations have… to give [migration] a space for expression.”

The event will also aim to combat growing prejudices against migrants that have been growing in Italy, which has closed its borders and ports to refugees, and across Europe.

Rasha Deeb, one of the five featured emerging artists, described her excitement for the project which gave her art, her self-declared “language of expression” during her own refugee story, a new platform.

Deeb was forced to leave behind a successful art career in Syria at the outbreak of the civil war. An art teacher and prominent sculptor, she fled to Lebanon but was forced to move on soon after due to political and administrative issues.

Arriving in Germany, Deeb remembers the difficulty of overcoming the preconceptions many had of refugees and as such was quick to reignite her artistic career to give voice to her story, her personal struggles, and those of millions of others. Her latest project focuses on the war in Syria and its effects on the population.

Rothko in Lampedusa has drawn its name from both the experience of famed artist Mark Rothko, who himself fled to the Unites States of America from Latvia following political and religious persecution, and the small fishing island to the south of Italy that has become a gateway for migrants into Europe in recent years.

The event, which will coincide with the 58th International Art Exhibition, also exhibits documentaries, installation-performances, creative workshops and a series of talks.

Rothko in Lampedusa will be hosted in the Fondazione Ugo e Olva Levi, Palazzo Querini, and will be open during the week and on weekends from 10:00-18:00 (closed on Tuesdays). More information can be found at www.artwithrefugees.unhcr.it.