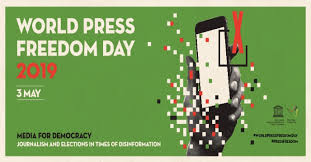 ROME – Two events will be held in Rome to celebrate World Press Freedom Day, which takes place annually on May 3.

At 10:30, there will be a sit-in in the Piazza Santi Apostoli. Guests from across the world will be present, including: Jan Krempasky, a Slovenian journalist; Manuel Delia, a Maltese reporter; Asmae Dachan, a Syrian writer and journalist; and Fazila Mat, a researcher at the Balkan and Caucasian Observatory.

At 16:00, the Assisi Charter will be presented and signed at the headquarters of the National Federation of the Italian Press. This is a manifesto against limits on the media and freedom of speech.

The events in Rome are organised by the National Federation of the Italian Press, the Unione Sindicale Giornalisti Rai (USIGRai), the Order of Journalists of Lazio, the Articolo21 association, Amnesty International Italy, and Rete NoBavaglio.

The UN General Assembly declared May 3 to be World Press Freedom Day in 1993, making this the 26th event. The day was chosen because it is the anniversary of the Windhoek Declaration.

African journalists gathered at a UNESCO seminar in Windhoek, Namibia, in 1991 and released a statement outlining the principles of a free press. This was the first of many similar declarations.

This year’s theme is: “Media for democracy: Journalism and elections in times of disinformation.” The main event takes place in Addis Ababa, Ethiopia, May 1-3.