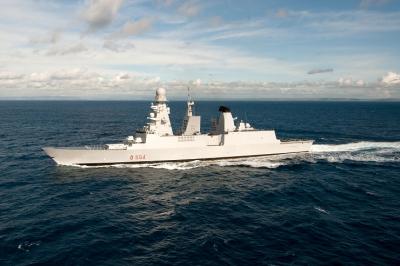 GAETA - From April 26 to 28, in Gaeta, south of Rome, the Italian Navy will take part in the 12th edition of the ‘Med Blue Economy’.

The event, which places the theme of the economy of the sea at the centre of its activity, a strategic resource of vital importance for a coastal country like Italy, promotes initiatives aimed at increasing international collaboration even beyond the Mediterranean basin.

For the occasion in Gaeta, at the Salvo d’Acquisto dock in the commercial port, the destroyer ship Caio Duilio will be moored, and the population will be able to visit on the following days and times:

The destroyer Caio Duilio, under the command of the ship captain Pietro Alighieri, is one of the two destroyers of the "Orizzonte" class, the result of an Italian-French cooperation.

The destroyer Duilio is the fourth ship of the Italian Navy to carry this name; launched on 23 October 2007 at the Riva Trigoso shipyards, it was delivered to the Italian Navy on 3 April 2009.

With a crew of 196 men and women, a length of over 150 meters and a full load displacement exceeding 7,000 tons, ship Duilio is the expression of cutting-edge technologies, state-of-the-art missile and artillery systems.

The pride of the national industry, specifically designed for air defense, the ship can perform command and control roles even in operations to support the community being equipped with numerous traditional and satellite communication devices as well as an infirmary with medical capacity of first aid.

A programme of the event can be found at https://eurispes.eu/med-blue-economy-gaeta-24-aprile-1-maggio-2019-progr...