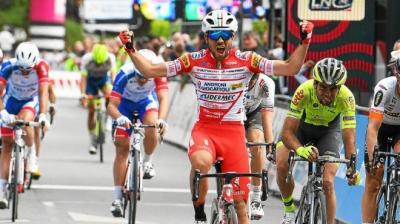 ROME - Italian Andrea Vendrame became the first ever Italian winner of the Tro-Bro Leon in its 35-year history after he produced an electric sprint to surge past rivals in the closing metres of the race.

Vendrame, a Venetian rider for the Androni Giocattoli-Sidermec team, stayed in a large group just off the leaders for much of the race, sheltered by a number of French teams who were vying for victory in their home race.

Tro-Bro Leon is considered the Breton equivalent of Paris-Roubaix, and the gravelled roads do not typically suit lighter riders like Vendrame.

However, having stayed out of the wind for much of the closing stages of the race, Vendrame surged forwards with less than 150 metres of the race remaining to win comfortably by a bike length.

“Luck was on my side today as I had no crash and no puncture,” Vendrame said speaking after his win.

“We came across the leaders in the last lap and the race situation was perfect for me. On Saturday at the Tour du Finistère, I finished second but I didn’t have good legs.”

“Today, I felt great all the way so I was confident in my sprint even though I knew some of the riders up there were quite fast.”

The podium was completed by Wallonie-Bruxelles’ Baptiste Planckaert and Emil Vinjebo of the Riwal Readynez Cycling Team.

Riders will now turn their attention to the final few Spring one day races before the circuit’s top cyclists battle it out at the season’s first Grand Tour, the Giro d’Italia, in May.