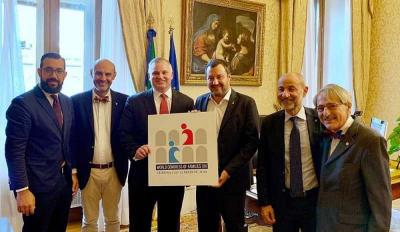 Matteo Salvini is amongst speakers who have been questioned over double standards regarding traditional family values. Photo credit: Discorsivo

Supporters of the event, people with predominantly right-wing inclinations amongst which Italian deputy prime minister Matteo Salvini, heralded the event a triumph, an important declaration of support for the nuclear family.

Opponents across the nation, however, were quick to point out that the event was in essence an anachronistic manifestation of regressive views that fought against years of progress. They were humoured, too, by the irony they saw in the event’s guests of honour.

“Pharisees” many of the event’s exponents were branded as left leaning media noted their inability to abide by their own rules.

They did have a point. Whether the collection of multiple divorcees, the married orthodox bishop, or the MEP who decided not to cement her second relationship with those sacrosanct wedding vows, the irony of those invited to speak on the sanctity of marriage and the traditional family came was manifest.

Salvini, a man twice married and twice divorced who had two further long-term partners at previous points in a tumultuous love life, was not exempt from their attention either.

However, these jibes, along with the event more widely, had little effect on people’s standing on the matter, aside from polarising the debate further.

What Verona did better evidence, though, was the disparate opinions of the current coalition government on important political and cultural issues. While the League rallied behind the movement, Luigi Di Maio and his party boycotted an event they saw as “a vision of the medieval world.”

The Family Day will not have significantly strained or weakened their partnership, but it did raise further questions about their efficiency given their respective positions.

In the weeks following the event, the government came under heavy national and European pressure. It came to light that Italy was set to see no economic growth over the coming year, that unemployment was on the rise again, and that the government’s flagship Basic Income scheme was all but dead in the water.

These are, of course, not a result of differences of opinion over traditional values, but Verona did serve as another reminder that a government subject to deeply entrenched contention is not delivering the progress its people or nation need and demand.