In the run up to Universiade Napoli 2019 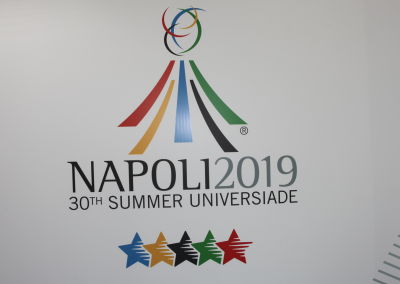 NAPLES - Ahead of the 30th Summer Universiade in Napoli, the Unione Stampa Sportiva Italiana (USSI) and AIPS Europe organised a one day symposium against the wonderful Campania backdrop at which various aspects of culture, sport and its development in the community within the framework of Napoli 2019 were discussed.

Napoli 2019 will be presenting over 8000 athletes from 129 countries and 222 medal events in an 18 sport discipline programme. The competition will be followed across the world and present new challenges where tradition, sport and culture will develop the concept of the 'Universiade'; that of universality and participation.
In the first session of the symposium, which was co-ordinated by AIPS Europe EC member and USSI vice president Gianfranco Coppola, sport media was the main item on the agenda. AIPS President, Gianni Merlo gave an overview of how AIPS has developed since it was established in Paris in 1924. Details on the various projects of AIPS to train and attract young reporters in sport media were supported by visual information relative to the presence of AIPS in past editions of the Universiade. AIPS President gave an update on the AIPS Sport Media Awards while making particular reference to the success achieved in Lausanne in January 2019 with emphasis on the record number of participants in the last edition. Then he went on to speak about this year’s edition which was launched recently and also presented the new official logo for this year’s Awards.
AIPS Europe President Charles Camenzuli spoke on ‘Universiade in the sport media framework’. He narrated the interesting story of former AIPS General Secretary Massimo della Pergola and his role in sport. Della Pergola was the person who in Italy invented and launched the ‘toto-calcio’ – the first ever betting system for football matches. With reference to the Universiade, Charles Camenzuli told of how in 1959 in view of the first ever edition, Massimo della Pergola had created the official word ‘Universiade’ on the basis of combining the words University and Universality. Together with former FISU President Primo Nebiolo, Della Pergola also created the official logo of the Games. In view of this, the AIPS Europe President suggested to the Organizing Committee that the Main Press Centre for the 2019 Napoli Universiade be named as Media Centre – Massimo della Pergola.
During another session Gianluca Basile, the commissioner responsible for the 2019 Universiade, gave an overview of the general organization. This was followed by a lecture by Marcel Vulpis on the aspect of sport in the everyday economy while Annapaola Voto – director of the area institutions known as ARU2019 – dealt with the role of women in sport both in participation and administrative aspect.
During the press conference of “Great sport event: passion in numbers”, the mascot Partenope and the Universiade Napoli 2019 official torch were presented to the media. The official presentation was done by Vincenzo De Luca, the President of the Campania region. The Torch, inspired to the draft of Martina Crumetti, answers to a very sustanaible project, thanks to the recyclable and non-polluting materials. The Mascot “Partenope”, a neapolitan symbol that intersects with the legend, the history and the mythology, was designed by the painter Melania Acanfora.
AIPS Europe was also officially represented by Vice President Gyorgy Szollosi and General Secretary Predrag Milinkovic. Together with other media guests from leading news agencies, they had the opportunity to visit the main hub of the organization, as well as see the progress being made in the Universiade infrastructure namely; the Palabarbuto Centre for basketball, and Piscina Scandone for swimming.
From April 18th until May 15th, 2019, national and international media will be able to get accreditation for the 30th Summer Universiade, taking place in Naples and Campania from July 3rd until July 14th, 2019, by filling the online form www.universiade2019napoli.it/media-accreditations  available through the event’s official website: https://www.universiade2019napoli.it
The issuing of the accreditation, which will depend on the limited number of available seats, will be communicated through the e-mail address provided in the online application form.
For any enquiries, one can contact Media & Broadcast Services by sending an e-mail to: mediaservices@universiade2019napoli.it
dk
ITALIAN
Italy
Sport