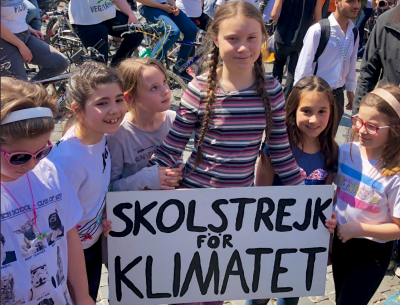 ROME - Greta Thunberg was amongst the thousands of young Italians to congregate in Piazza del Popolo for a Fridays For Future climate change rally.

Thunberg was amongst the impassioned speakers and musicians to take to the stage in defence of the environment and address the 10,000 estimated to be in attendance.

Opening to the sound of “We are saving the planet alongside Greta” chants, Thunberg began a passionate speech praising the hard work of those in Italy and across the world who had joined her in campaigning for change.

Her Fridays for Future movement has been taken up in 1,325 locations in 98 countries worldwide since she first started a solo protest in 2018.

The movement has seen students across the planet strike from school in order to campaign for serious change.

“We children are not sacrificing our education and our childhood for adults and politicians to tell us what they consider is politically possible in a society that they have created,” Thunberg told the crowds.

“We have not taken to the streets to take selfies with us and tell us that they really, really admire what we do.

“We are not the ones who have created this crisis [but] we have decided to take action because we are fed up with all the lies and broken promises.”

“The only thing we need is a future,” Thunberg concluded.

Voices for change have dramatically gathered momentum after it came to light that, according to scientists across the world, we currently find ourselves a decade away from irreversible climate damage.

According to famed conservationist David Attenborough, the net result if we do nothing will be drastic destruction to nature and wildlife as well as the possible collapse of our societies.

While 195 countries signed the Paris agreement in a promise to secure a more sustainable future, campaigners have been frustrated by the lack of governments to have taken any concrete steps to implement the accord.

The Central Bank, The Bank of England and the United Nations are amongst prominent bodies to have spoken out regarding the dire situation that earth finds itself in.

The UN were warned that unless global warming was kept to within 1.5 degrees, the risks of drought, extreme weather and heat, rising sea levels and floods, and poverty and starvation for hundreds of millions would soar.

Thunberg made headlines in Italy earlier this week after she both spoke at the Italian senate and met with Pope Francis at his weekly audience in the Holy See.

The pontiff was quick to thank Thunberg for her work in raising awareness of the serious environmental issues we face, and encouraged her to continue her movement. 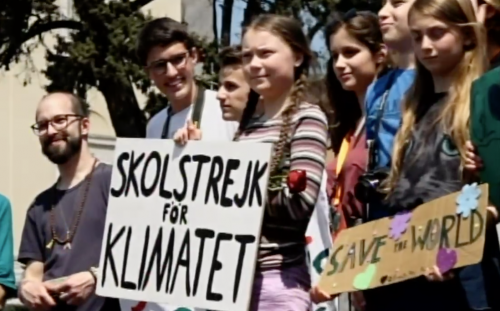 Thunberg holding her now famous sign on stage after delivering an impassioned speech. 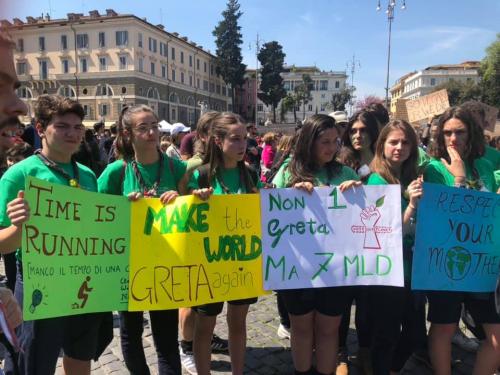 School children from across Rome and the surrounding areas were in attendance. Photo credit: Chiara Gigliotti
Rome
World
Italy