Napoli crash out of Europa League after sorry home display 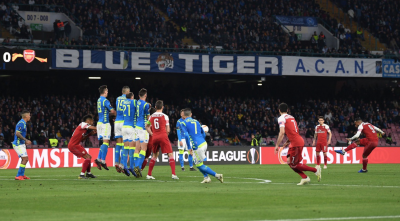 Alexandre Lacazette's free-kick saw Arsenal beat Napoli for a second time in a week to progress to the semi-finals. Photo credit: Arsenal FC

ROME - Napoli were knocked out of the Europa League quarter-finals by Arsenal on Thursday night, losing against the English side for a second time in a week following another limp performance.

Carlo Ancelotti’s men went into the game off the back of a 2-0 first leg defeat. However, given Arsenal’s dismal recent form on the road, Ancelotti and his players knew they were still in with a shot of taking something from the tie.

Ancelotti himself, following Napoli’s lacklustre away performance, even went as far as saying: “It will be a different environment with our home crowd behind us… I’m confident.”

Ancelotti was not wrong to be assured. The home crowd did indeed turn up in force and drowned out the travelling Arsenal fans for much of the first half.

Crucially, though, Ancelotti’s men failed to do likewise and, while they were not by any means outplayed, they showed very little of the defensive mettle or attacking prowess they have done over the course of the Serie A this season.

A goalkeeping error by young shot stopper Alex Meret error allowed Arsenal forward Alexandre Lacazette to curl in a wonderful freekick from 30 yards out, an away goal that left Napoli needing four goals of their own to progress.

They did come close through Jose Callejon and Arkadiusz Milik, but ultimately they were unable to break Arsenal's resistance, suffering only their second home defeat of the season and coming up well short over the course of the two legs.

Defender Kalidou Koulibaly apologised to fans after the 1-0 defeat, and said his side needed to exhibit much more desire in their quest to progress.

Arsenal now move on to play Valencia in the semi-finals, while Chelsea will meet Frankfurt on the other side of the draw.

Napoli, meanwhile, will turn their attention back to ensuring second place in the league and hoping for better next year in Europe as their qualification for the Champions League seems all but guaranteed.