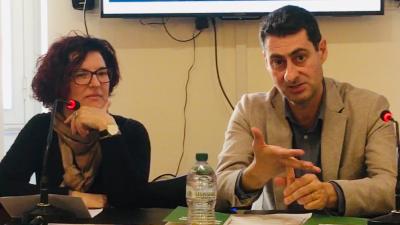 ROME – ‘Real’ experts on Islamic issues should be consulted if the Italian media want to avoid fanning the flames of anti-Muslim sentiment in Italy, sociologist and author Fabrizio Ciocca said on Wednesday.

Speaking at the EGIC (Euro-Gulf Information Centre) following the launch of his book – L’Islam italiano: Un’indagine tra religione, identità e islamafobia – Mr Ciocca told The Italian Insider that radio and television programmes rely too heavily on the opinions of so-called experts with limited knowledge of Muslim issues, which has a significant impact on shaping the views of the general public.

“In Italy we have a lot of people who teach at university. In Napoli we have Studi L’Orientale so we have a lot of scholars who, during the years, have been studying a lot about these issues, so they could [instead] call them,” he said.

He added that a direct link can be made between Islamophobia and the mass media “because every time there is a terrorist attack … they always blame Muslim people. So in Italy, this has a huge impact.”

Mr Ciocca is also critical of the recent press coverage of the New Zealand mass shootings that left 50 people dead at two mosques in Christchurch – “The main 25 Italian papers, not one of them had mentioned the terrorist attack on the Muslim community, they just said it’s an attack about racism and hate,” Mr Ciocca said.

“So they didn’t mention [the word] Muslim in their main title, ever.”

To avoid generating high and unjustified levels of Islamophobia, Mr Ciocca said the mass media should use “real terms” when talking about this “delicate issue,” refrain from talking in terms of an attack against Italy or Europe, and stop tarring all Muslims with the same jihadist brush.

“They should clarify that jihadists are just a small, small [number] in one billion Muslims,” he said.