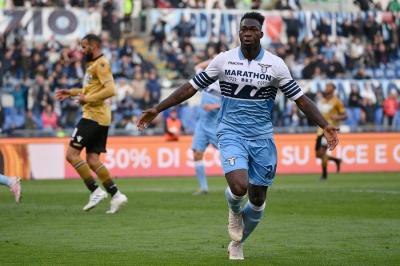 ROME - Two goals in three minutes were enough to see Lazio take three points from their tie against Udinese and move to within touching distance of the European qualification spots.

Simone Inzaghi’s men went into the game off the back of a torrid run of form. Having jumped into fifth spot at the end of March, two losses and a draw in their subsequent three league matches saw them slip well off the pace into eighth.

Lazio knew that victory against Udinese was essential if they were to keep their hopes of European football alive, and they were quick to take control of the game.

Felipe Caicedo latched onto a Ciro Immobile through ball in the 21st minute, slotting in at the near post to put his side ahead, before a Sergej Milinkovic-Savic header was turned into his own net by Udinese midfielder Sandro a matter of minutes later.

Udinese were gifted a glorious opportunity to get back into the game in the second half when Kevin Lasagna was brought down by Lulic inside the box.

However, Lazio shot stopper Thomas Strakosha made a fine save from the resulting penalty, beating away Rodrigo De Paul’s effort and ensuring his side held onto their two goal advantage.

The result moves Lazio to seventh, one point between Atalanta in sixth and only three off Milan in fourth.

They host bottom side Chievo this weekend before travelling away to Sampdoria, knowing wins in both matches will be crucial as the Serie A moves towards its conclusion in May.