Analysis: Algerian protesters are fed up with three Bs 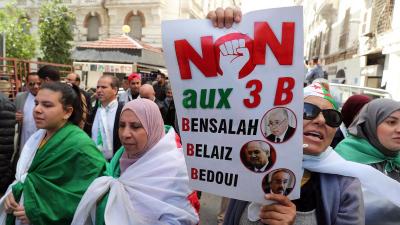 Demonstrators have said they do not want three men with ties to the regime to be involved in the political transition. Photo credit: The National

ALGIERS - To the consternation of tens of thousands of protesters in Algeria, who have been clamouring for change for two months, MPs appointed Abdelkader Bensalah interim president last week.

The nomination of this regime stalwart was boycotted by opposition parties. His appointment has upset millions of Algerians, who held out hope of sweeping reforms. Instead, they have a man justifiably seen as cut from the same cloth as ousted president Abdelaziz Bouteflika.

So yesterday, they were back on the streets of Algiers and Oran, only this time they were calling for Mr Bensalah to step down.

“Out with Bensalah,” demonstrators shouted and were rewarded, for the first time in eight weeks of peaceful demonstrations, by police firing tear gas and using long range acoustic devices to try to disperse them.

Mr Bensalah’s appointment for a 90-day transitional period, before elections are held on July 4, might chime well with regime supporters but for protesters, he represents all that was wrong with the previous regime.

The 77-year-old, a longstanding supporter of Mr Bouteflika, has had a long career as a civil servant, spanning more than 50 years. He first worked as a journalist in Beirut and Algiers before becoming an ambassador to Saudi Arabia. He also served as president of the 1992 post-coup National Transitional Council before presiding over the lower and upper house of the Algerian parliament.

As a founding member of the pro-government National Democratic Rally, he was embroiled in the allegedly fraudulent 1997 election, in which his party rose to power and ended up controlling most local and governmental departments. The election was the first to be held after the army intervened in 1992 to violently seize power in a coup, following the victory of the Islamic Salvation Front at the polls. Instead of giving the veneer of democracy, it left voters outraged amid claims the election was rigged in favour of the National Democratic Rally.

On being appointed, Mr Bensalah told MPs: “I am required by a national sense of duty to take on this important responsibility of steering a transition that will allow the Algerian people to exercise its sovereignty.” He himself will not be able to run in presidential elections. Yet his appointment is viewed by many as being anything but the first stage in revolutionary change. As a close and trusted ally of Mr Bouteflika – he often spoke publicly on his behalf after the former president suffered a stroke in 2013 - his nomination seems to denote that Algeria’s powerful top brass have no intention of handing over power to the people but simply intend regime insiders to steer the transition period under a military umbrella.

In a recent televised speech, army chief Lt Gen Ahmed Gaid Salah, who had a hand in Mr Bouteflika’s resignation, backed Mr Bensalah. He affirmed that “the nation’s institutions must be preserved during the changeover”. He also said the military would keep an eye on the process of transition but suggested it would not get involved.

However, ever since independence from France in 1962, the army has been the backbone of the regime in Algeria. The military has regularly interfered in local and national politics, making and unmaking government ministers, chief executives for state-owned firms, politicians and presidents.

Mr Bouteflika himself was made president in 1999 when a group of generals wanted to cover up human rights abuses during the 1990s civil war.

Mr Bensalah has said he will act swiftly to organise an “honest and transparent” election to inaugurate an “Algeria of the future” and announced elections, a day before Algeria’s independence day.

However, the protest movement is calling for a new transitional framework that is committed to far-reaching and genuine reforms. Algerians are also pushing for a wider overhaul of the political system.

Three men in particular have prompted demonstrators’ anger. They have been dubbed “the three Bs” – Mr Bensalah; Tayeb Belaiz, the head of the constitutional council; and the prime minister, Noureddine Bedoui. Protesters said they do not want these three, who are known to be Bouteflika loyalists, to be involved in the political transition. They want fresh faces to signify a true fresh start.

The big question now is whether Algeria's army will sanction a changeover that really does give sovereignty to the people.

According to Sarah Whitson, the director of the Middle East and North Africa division of Human Rights Watch: “As Algeria finds itself at a crossroads, reform will be genuine only if it involves dismantling the repressive legal machinery that the authorities have used for years to repress dissenting voices.”

In his most recent speech, Lt Gen Salah warned protesters about making demands that could destabilise the country. He wants protesters to go home.

But Algerians did not take to the streets to have cosmetic changes – nor will they be satisfied by elections planned by the same authorities, the same men and the same administration. As lawyer and human rights activist Mustapha Bouchachi says: “The Algerian people don’t accept that the government, or a symbol of power of this system, will manage the transition period.” It looks like the three Bs are running out of time.

This article first appeared in The National