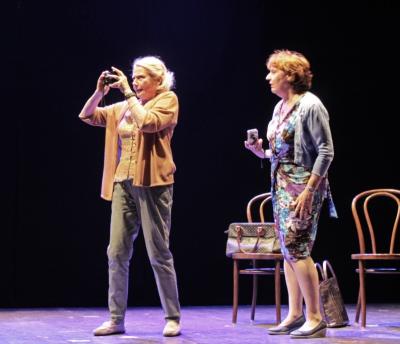 Maggie and Brigid try and snap a picture of the Pope. Photo credit: Fabio Barilari

ROME - Shane Harnett’s latest play “Maggie ‘n’ Brigid”, a sharp-witted social commentary and playful exploration of the renascent friendship between two ageing Irish ladies, proved a true success as its première drew to a close to the sound of thunderous laughter and applause at Rome’s Teatro San Genesio.

Harnett’s original play follows the intertwining later years of his two eponymous characters who, after years of growing apart, rekindle a tender, albeit recurrently irascible, friendship.

Maggie, portrayed by Maggie Davies, is a stoic widower who mourns the death of her “gobshite” of a husband. She initially proves a rigid personality but her offbeat friendship with sharp-tongued and witty cancer patient Brigid, portrayed by Shelagh Stuchbery, leads to a wonderful, idiosyncratic relationship that blossoms as the play unfolds.

The play opens with a clever juxtaposed exposition of the characters in which the two alternatingly confide in the audience, each delivering a few, factually diverging lines in which they relay their lives and eventual reunion in a local cookery class.

The hilariously differing versions of events lay the groundwork for the comedic prowess of Harnett’s work, and seem shrewdly pertinent in the ‘fake news’ dominated society we inhabit today.

The two ladies manage to move past their differences, their unresolved squabbles over the chocolate covering of éclairs or the construction of a beef wellington, and on Maggie’s suggestion end up in Rome together on a mission to see the Pope, a trip that defines their friendship.

“They say there’s no religion in the Vatican,” Brigid jokes as they make their travel plans, in a moment that best defines what makes the play so captivating.

As the two discuss religion, sex, family, relationships, and ideologies over the play’s course, Harnett’s script fluently fuses sharp social comment with playful Irish humour. His critique is witty, light-hearted and self-aware, and the result is a script that seamlessly uses comedy and folly to address polemical issues and provoke thought.

Much credit should also be given to Davies and Stuchbery for their interpretation of Harnett’s text. Stuchbery’s delivery and stage persona regularly had the audience in stitches, while Davies was unfaltering in her portrayal of a more stiff-upper-lip traditionalist and no less humorous when her character demanded.

The play did lose some of its fluidity in the closing scenes, when age and ailment take their couse. These more heartfelt and tender moments came too suddenly and were perhaps too ephemeral, and consequently felt a touch incongruous from Maggie and Brigid’s previous, more light-hearted interactions.

This, however, did little to take away from what was a truly entertaining original play. Harnett’s reflection on life and death, on friendship and separation, and on love and humour was captivating, while Davies and Stuchbery were magnificent in their portrayal of the two protagonists.

The Teatro San Genesio can be found on Via Podgora 1 just off Viale Mazzini. Future productions can be found on their website: http://www.teatrosangenesio.it/. Maggie 'n' Brigid was put on thanks to Wonderwall Entertainment, a non-profit enterprise dedivated to the promotion of, and cultural exchange in, the arts. 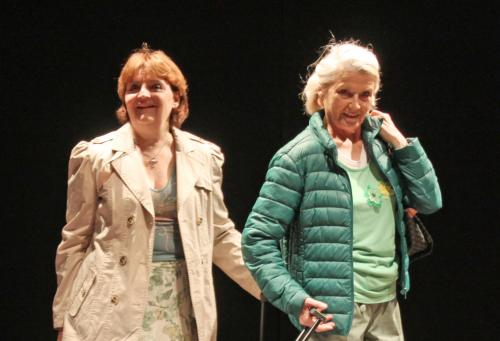 Maggie and Brigid's rekindled friendship is as tempestuous as it is tender. Photo credit: Fabio Barilari
ITALIAN
Culture
Rome