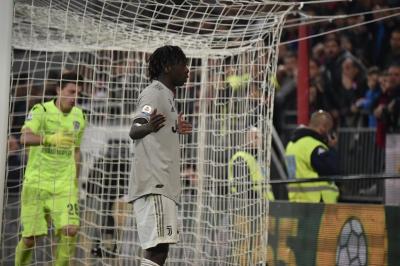 ROME - Juventus’ comfortable victory against Cagliari at the start of April highlighted two things. First, the Bianconeri are simply head and shoulders above any other team in the Serie A this season: the Turin outfit has rarely looked like breaking a sweat and continues to march relentlessly towards an eighth successive scudetto. Second, the Italian footballing world remains unwilling, or totally unable, to tackle racism as Italy and Juventus star-in-the-making Moise Kean became the latest in a long list of players to suffer abuse during a football match.

Teenage striker Kean was subject to racist chants throughout the fixture and, after he celebrated scoring a goal with five minutes to go by raising his arms and staring out at the Sardinian fan base in apparent defiance, abuse thrown his way only amplified. Such was the aggression he faced that officials paused the game for three minutes while an announcement over the stadium’s tannoy system repeatedly called for chants to stop. The announcement threatened to abandon the game if they did not.

The abuse suffered by Kean came only hours after UEFA president Aleksander Cerefin urged referees to be brave and to take teams off the pitch if players were subjected to racial insults. It is unclear whether the chants hurled at the Juventus player stopped after the tannoy announcement, but in spite of Cerefin’s words the game certainly did not.

It wasn’t long before the template apology and promise of individuals being banned were trotted out by the Italian Footballing Association (FA) but these responses are as tired and ineffectual as the racism is persistent.

The Italian FA has yet again failed to accept responsibility for what has now become a polemical issue. The FA must stop deflecting blame for continued racism on the scapegoat ‘few individuals’ who ruin it for everyone. It needs to hold itself accountable or be held accountable: its policy of banning of culpable individuals has been in place for a number of seasons now but the incidents of racism have in no way decreased. Where are repeated and substantial club fines? Or the docked points? Or lengthy stadium bans? Where are the real punishments?

As the anti-discrimination organisation Kick It Out pointed out, “this is the third year in a row that black players have been racially abused at Cagliari – Blaise Matuidi and Sulley Muntari have faced the same treatment [as Moise Kean], and yet the Italian FA allows it to continue.”

Cagliari aside, racism is widespread in the Italian league. Just last Christmas, Napoli centre-back Kalidou Koulibaly was another high-profile victim of racial insults during a football match. On that occasion, the game wasn’t even paused for an announcement to be made despite the Naples side reporting the racist chants to match officials on three separate occasions, each time asking them to suspend the game.

Serie A may argue that progress has been made since then: at least in Kean’s case when the racial chants were challenged over the stadium’s speakers on match day. But such a defence reveals a fundamental misunderstanding of its role and responsibilities. The Italian FA should not aim merely to punish individuals and react to racist incidents after the event; rather they should aspire to adequately protect their players and create a culture in which racism is denormalised, decried, and actually dealt with. The reality is that they are currently a very long way from effectively delivering even on the existing inadequate policy.

A meaningful discussion on racism seems far removed from the Italian footballing narrative: what followed the shocking racial abuse of an Italian teenager was the equally disquieting reaction of certain Serie A players and media outlets.

Kean’s teammate Leonardo Bonucci after the match stated that the blame was “50-50” between Kean and Cagliari fans. Kean, in his eyes, should be equally culpable because his celebration, which if anything marked a restraint footballers so often lack, may have provoked further racial aggression against him. Incidents of victim blaming went on, Kean’s head coach Massimiliano Allegri declaring that the player “should avoid certain celebrations and certain behaviours.”

The media quickly followed suit as some Italian sports pundits suggested that “Kean went a bit too far with the Cagliari fans,” and many newspapers, at least those who deemed the incident worth reporting on in depth, went on to echo these criticisms.

Few within Italy were prepared to acknowledge any fault on the part of the footballing community. Many were quicker to point the finger at Kean for standing up for himself, rather than at the scores of abusive fans. The blowout highlighted how Italy is still far from ready to tackle racism seriously.

By contrast, voices of disgust at the widespread Italian reaction were quick to follow from across Europe, as Kean failed to find sufficient solidarity from his own nation’s football body. Manchester City forward Raheem Sterling, who himself has repeatedly been the target of racial abuse, said “all you can do is laugh” when discussing Bonucci’s comments. Mario Balotelli went further, writing on Instagram: “Bonucci is lucky that I wasn’t there. Instead of defending you he does this? I’m truly shocked.”

Yaya Touré, African footballer of the year for four years running, was also critical of Bonucci and Allegri’s actions: “For me it’s a disgrace… It was unbelievable….

Yet these calls to action, like so many before, fell on deaf ears. A report submitted by official inspectors at the match consigned much of the noise to booing and jeering, saying that there were only between 40 and 50 racist offenders. This number was considered too low to be “scandalous” and attest to any form of widespread racism so the investigation ended there.

The net result is that the Kean incident ends there. An official report evidenced that a teenage player was abused by between 40 and 50 people and still nothing will change. A few individuals will receive bans but the only one truly punished at the end of the day remains Kean himself, made to feel a pariah in his own nation.

Danny Rose, an England international who currently plays for Tottenham Hotspur in the Premier League, recently came out declaring that “he can’t wait to see the back of football.” Such is his anger at the inaction against racism that he is counting down the days until he can retire from the game he loves.That’s in England, where the FA’s stance against racism is significantly more progressive. So if that is how Rose feels in the UK, it is hard to imagine what Kean and other racial abuse victims in Italy must feel like on a weekly basis.

Football seems to have its own set of rules which do not equate with those of a civilised society. It is a game so widely loved and followed that when it is confronted by abhorrent behaviour the sport which is so often called on to set an example paradoxically absolves itself of any guilt and moves on.

When Cristiano Ronaldo was accused of rape, his fanbase barely flinched. When Lionel Messi was convicted of tax evasion, defrauding the Spanish state of over four million euros, people actively called on judges not to give him a prison sentence for fear it would damage the game. The bottom line? Come what may, football can shake it off. There is no accountability because no one wants to damage the game.

Consequently, incidents of racism thunder on and the Italian FA can simply continue to shirk any responsibility, because after all this is what the current measures they introduce amount to.This will likely not be the last Italy sees of racism in this year’s Serie A season, and authorities only have themselves to blame.

FIFA’s motto reads: “For the Game. For the World.” But until the Italian FA realise that humanity should supersede the game, until players rally around their counterparts when they suffer abuse, until media and society decry what they see amongst their ranks, Italy will continue to fulfil only one of these maxims at best. Football is a game of two halves: let us hope that the second will be an improvement on the first.