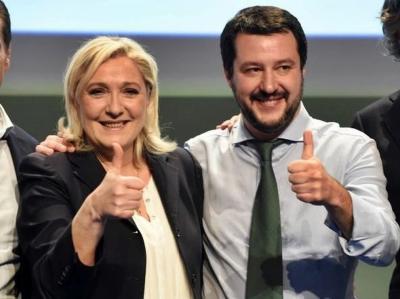 MILAN - Italy’s deputy prime minister Matteo Salvini will meet with leaders of far right-wing political parties from across Europe, amongst which Germany's Alternative für Deutschland (AFD), in his attempts to forge a nationalist alliance as EU nations prepare for elections in May.

Salvini is set to host, among others, Joerg Meuthen, leader of Germany’s AFD party, and representatives from the Freedom Party of Austria and Spain’s resurgent Vox party at Milan’s Hotel Gallia on April 8.

The move follows widespread populist surges across Europe that have seen right-wing parties take power in Italy, Poland, Hungary and Austria and gain significant support in France, Spain, and the Netherlands.

Salvini has overseen sustained right-wing growth in Italy in the past few months, as his League party followed up a strong showing in the 2018 elections with significant gains in recent regional elections.

Abruzzo, Basilicata, Molise and Sardinia are just four of the regions that have shifted to support Salvini's right-wing movement in the past year.

Basilicata, in particular, marked a crucial political shift after it overwhelmingly voted to support a right-wing backed candidate in March, bringing an end to 24 years of left-wing dominance.

Salvini is now keen to take this success beyond the confines of Italy’s geographical borders and really challenge longstanding centre-left control of Europe.

One notable absence from the meeting in Milan will be Hungary’s prime minister Viktor Orbán. While Orbán shares many of Salvini’s views, most notably on immigration and criticism of the EU, the leader of the Fidesz party has elected not to break from his alliance with the European People’s Party (EPP).

Orbán and his party were suspended from the EPP in March after the latter thought Orbán’s far-right views and policies could damage their support in the upcoming elections. However, Orbán hopes his party will be reinstated in the union after May 26 and has plans to move the EPP further to the right.

Orbán has not, though, written off an alliance with Salvini’s union once elections are over if he sees that his union with the EPP is not as fruitful as hoped.

Le Front National’s Marine Le Pen will also be absent from the meeting, however this is down to campaign commitments in France, and she is believed to be a supporter or Salvini’s proposed union.

Salvini’s League party is currently predicted to win the second greatest number of European seats, behind only the union of Germany’s Christian Democratic Union its Christian Social Union, and Italy’s Interior Minister is hoping to capitalise on the wave of support right-wing movements across Europe.

He is expected to go on a tour of Europe following next week’s meeting to rally support for his alliance. He is likely to visit France, Germany, and Austria and will appear over live stream in smaller European nations.