Finance Minister's advisor to stay on amid M5S criticism 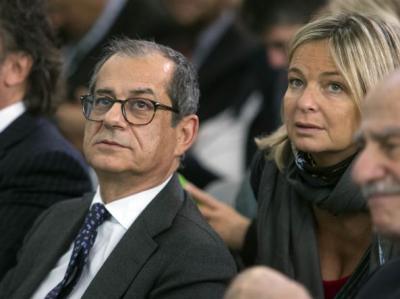 ROME - Claudia Bugno is set to remain in her role as Advisor to Giovanni Tria, Minister of Economy and Finance (MEF), in a move that has created further divisions between the 5 Star Movement (M5S) and the League in Italy’s coalition government.

Bugno's continuing role in governmental comes as the latest source of friction between Tria and the MS5. Di Maio's party consider the Minister too cautious in his fiscal policies, a fact compounded this week after it was revealed that Italy's economic growth for the last financial year was close to zero, as the nation fell yet further behind its European counterparts.

Bugno, one of Tria's closest advisors, has come under fire from the M5S in recent weeks. The party have repeatedly voiced concerns that past and present positions held by Bugno in private companies across Italy present a conflict of interests for her role in government.

Bugno was an independent advisor for Banca Etruria between 2013 and 2015, the year that the bank was liquidated following economic collapse and left hundreds of thousands of clients without compensation, for which she was fined 121,500 euros by Bankitalia.

Bugno subsequently took on an advisory position with Alitalia between 2015 and 2018.

More recently, Bugno was also offered a position on the board of French-Italian multinational STMicroelectronics, in which the Italian Treasury holds shares.

Further concerns of Bugno’s business involvements were also raised when it came to light that Tria’s step-son currently holds an important position in Tinexta, a leading IT company whose CEO is Bugno’s husband.

The M5S were adamant that Bugno should turn down the position at STMicroelectronics, which she did in due course, but have been left frustrated that she did not renounce her position at the MEF as they later demanded.

“This step back is not enough, she must leave her role in the (MEF’s) staff,” M5S sources stated, going on to assert that she negatively impacted the ministry and its actions, and that she should consequently be moved elsewhere.

MEF Deputy Minister Laura Castelli also spoke of her apprehension, telling La Stampa: “from what I know, Bugno has adopted markedly personal positions, not ones coordinated with the rest of the government, for months.”

She went on to add that Bugno had acted in a “disorganised and non-transparent way.”

The M5S are particularly concerned that Bugno’s time at Alitalia has influenced the MEF, who so far have shown reluctance to invest in the struggling airline and keep it afloat, a key policy of the M5S.

Tria has, however, retained the support of Salvini’s League. The right-wing party have been less troubled by Bugno’s position than their coalition counterparts as the relationship between the two parties becomes ever more strained.