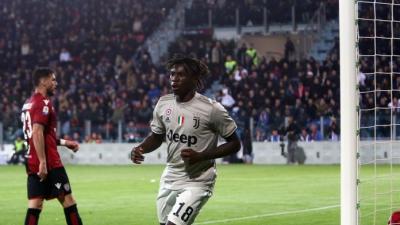 ROME - Juventus’ away victory over Cagliari was marred by incidents of racist chanting directed at Blaise Matuidi and teenager Moise Kean as the Bianconeri continued their relentless march to an eighth successive Serie A title in the Sardinian capital.

Juventus were leading 1-0 with five minutes to go when Kean slotted home his side’s second to put the game to bed.

He celebrated in front of the home supporters raising his arms in apparent response to the abuse he had been subjected to during the match.

His actions, however, only saw racist chants intensify, and play was consequently paused for three minutes as the crowd were warned that their actions could lead to the game being stopped over the tannoy system.

Luca Ceppitelli, Cagliari’s captain, implored the fans behind Cagliari’s goal to stop chanting as Matuidi remonstrated with the referee.

The abuse is not the first time Italy’s national league has come under the spotlight for failing to tackle racism this season, as pressure on Serie A authorities to introduce tougher punishments on offenders continues to grow.

The chants came mere hours after UEFA president Aleksander Cerefin had called on referees to be “brave” and stop games and take the teams off the field if racist chants are heard.

Current measures to combat racism include individual bans or, on rare occasions, teams playing behind closed doors in front of an empty stadium. Teams have yet to be led off the field in Italy.

Kean after the game posted a photo of his defiant celebration on Instagram, writing: “The best way to respond to racism,” with Matuidi later tweeting his support.

Juventus now have a healthy 18-point gap at the top of the table with eight games left to play as they all but wrapped up their eighth successive scudetto.

Elsewhere, AC Milan missed a glorious opportunity to consolidate a Champions League qualifying spot by drawing 1-1 at home against a struggling Udinese.

Milan had taken the lead through Krzysztof Piatek on the stroke of half-time but were unable to capitalise on an otherwise dominant performance as a ruthless Udinese counter attack saw them take home a share of the spoils, a welcome boost in their relegation scrap.