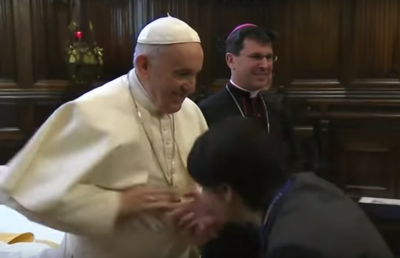 VATICAN CITY - Pope Francis revealed that his decision to repeatedly pull away his hand to avoid pilgrims in Loreto from kissing his ring was due to a fear of spreading germs.

He insisted that it was not the tradition itself that Francis was opposed to, as he had allowed smaller groups to kiss the ring on multiple other occasions, but rather the risk of the spread of germs between people if

“The Holy Father told me that the motivation was very simple: hygiene,” Gisotti declared.

“He wants to avoid the risk of contagion for the people, not for him.”

Gisotti went on the add at that Francis is not opposed to the tradition itself, having allowed smaller groups to kiss the ring on multiple other occasions, but rather was wary of the sheer volume of people who hoped to perform the traditional act of respect at Loreto.

Francis’ break from tradition has divided those in the Catholic community. Many conservative members of the church have denounced his actions which they see as a mark of disrespect to a custom that dates back hundreds of years.

More progressive voices have, however, praised the action as a great step forwards as a means of bringing church authorities closer to their people.

Videos of Francis pulling away his hand have since gone viral on the internet and have been viewed over one million times cumulatively.