Theatre: A gripping rendition of The Dumb Waiter 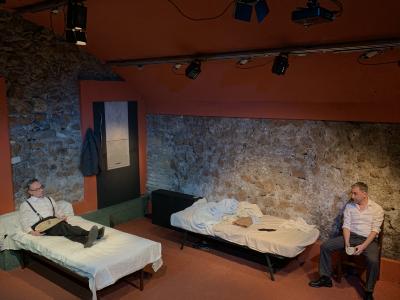 ROME - Harold Pinter’s ‘The Dumb Waiter’ was wonderfully interpreted as The English Theatre of Rome drew March to a close March by breathing new life into a classic. The play, produced by Gaby Ford, left its opening night audience transfixed in its poignant exploration of human relationships, obedience, and modern society more widely.

The Arciliuto Theatre, nestled in the maze of roads behind Piazza Navona, provides the perfect setting for Pinter’s work. The stage is subterranean, its backdrop exposed brickwork, and it fittingly mimics the non-descript basement room in which the Dumb Waiter unfolds. In fact, that the audience are physically underground, sharing the space the actors inhabit, breaks the fourth wall before the play even begins. There is not so much a stage in this interpretation as there is a shared space and experience.

The result is an asphyxiatingly intimate setting. So much so that when Gus laments the absence of a window, the audience too can share his pain as the air hangs thick over a communal sense of claustrophobia for spectator and actor alike.

The play revolves around two hit-men, Gus and Ben, waiting for their next assignment. It opens with Gus, portrayed by director Douglas Dean, fidgeting restlessly as his companion Ben, portrayed by English Theatre of Rome old-hand Daniel Roy Connelly, reads a newspaper. As Gus continues to shuffle around the stage, Connelly brilliantly captures Ben’s growing disdain, and his frustration towards his colleague is tangible as he exhales violently and flicks through his paper.

The opening few minutes of the play unfold with not a word spoken, yet Connelly and Dean have the audience captivated from the off. Once the two break the silence, they shift wonderfully between flaring emotions, growing anxiety and mundane chit chat as they await further instructions.

A particular strength of this interpretation is its portrayal of the balance of power between the dominant Ben and the quasi-subservient Gus. Dean, in particular, is highly convincing in his portrayal of Gus and he visibly battles to suppress his growing apprehension with his obedience to Ben and the anonymous higher powers that govern above. He paints a pained and conflicted character, trapped physically and emotionally by his situation, as the threat of violence starts to bubble over.

Silence is also an integral theme in ‘The Dumb Waiter’ and is often as important to the play as language itself. What is not said, what is left hanging in the air, is as essential as the words spoken. The pauses, unfinished sentences and unanswered questions give rise to a growing tension throughout the play. Dean and Connelly capture this from the off, and the chemistry between the two is at its most electric in the play’s opening fragments of conversation.

The suspense, though, dissipated slightly as the play drew to its climax. Silences became fewer and further between, and perhaps more could have been done to enhance the stale atmosphere that had gradually been building throughout. Lines at times too quickly followed on from each other, without allowing enough time for their effect and implications to linger substantially in the strained atmosphere.

However, it did little to take away from Dean and Connelly’s enthralling performance. As the play closed in explosive fashion, the room plunged into darkness and two left a stunned audience behind them. It took a few moments for those present to recover but they soon burst into thunderous applause.

There were no props or elaborate costumes for the two to hide behind, and not much space for them to work with. It was just two men on stage and the intensity of their acting that created such a captivating rendition of Pinter’s work.

The English Theatre of Rome’s interpretation of The Dumb Waiter will run from 21 – 31 March at the Teatro Arciliuto (Piazza Montevecchio 5, 00186 Rome). Tickets cost 12 euros and can be reserved by emailing rometheatre@gmail.com. 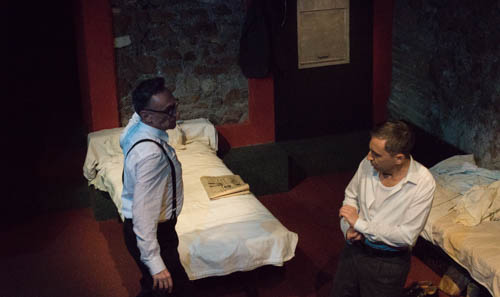 The tension between Connelly and Dean was palpable throughout. Photo credit: Cameron Clark