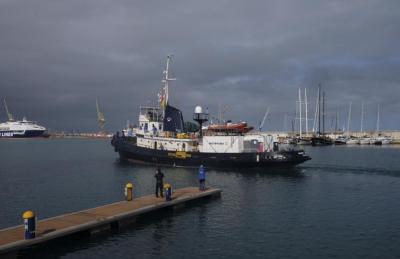 ROME – Interior Minister Matteo Salvini said Tuesday that 49 migrants rescued in the Mediterranean by an NGO-run ship flying the Italian flag now stationed off the coast of Lampedusa will be prohibited from landing in Italy.

“They can be treated, dressed and fed,” said the League leader. “We can give them any kind of comfort but they will not set foot in Italy with my permission,” he added.

“We are heading north towards our country, because we beat the Italian flag,” said head of the NGO mission Luca Casarini. “Let's go north to give a safe haven to these castaways, as our law says, and as humanity also says,” he added.

However, authorisation to disembark the vessel has not been granted and it is anchored surrounded by Coast Guard and finance police boats.

“This was not a rescue operation … This is assisting illegal immigration,” declared Salvini. “The ports were and remain closed,” he stated in a tweet Monday.

Interior Ministry Undersecretary Nicola Molteni also spoke arguing that the migrants should be taken back to Libya given that the rescue took place in Libyan waters and should have been coordinated by Libyan authorities.

Deputy Prime Minister Luigi Di Maio expressed that in the case of a health emergency the migrants on board will be disembarked, stating “Human lives are our priority, but this NGO has apparently not respected the rules.”