Italy come up short yet again in Six Nations 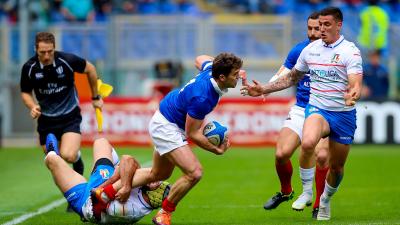 ROME - Italy missed a glorious opportunity to claim their first victory in the Six Nations since 2015 as France doggedly held out for victory at the Stadio Olimpico.

The Azzurri came into the game off the back of another underwhelming campaign that has yet again raised questions about their place in the competition. After a thumping at the hands of England in the penultimate round of matches, Italy knew that only a win would do if they were to salvage any credibility from the tournament.

Italy started brightly, and two early Tommaso Allan penalties had them 6-0 up within the first quarter of an hour. They were pegged back shortly later, an Antoine Dupont try and a Romain Ntamack conversion and subsequent penalty leaving the score 10-6 but remained very much in contention.

Italy were desperately unlucky not to respond with a try of their own shortly after. Debutant Marco Zanon was through for a certain try on the receiving end of lovely Allan kick only to see the ball bounce off the post and into French hands as he prepared to scoop it up and touch down.

The Azzurri went close again, only for France to hold up a rolling maul and the teams went in at the break with the score unchanged.

Allan struck early in the second half with a third penalty, but Italy’s defence was outclassed minutes later as winger Yoann Huget showed great pace to tear through for his side’s second try of the afternoon.

The Italian crowd did have something to celebrate, though, when scrum half Tito Tebaldi dotted down for the Azzurri’s first try.

Zanon almost went over with five minutes to go but was again denied, this time by some fine Damian Penaud defending and Italy were left ruing their missed chances, wondering what might have been, as Penaud almost immediately touched down at the other end to give France a 25-14 victory.

Italy have now gone a record 22 games without a win in the competition and have work to do before they travel to Japan for the Rugby World Cup later this year.