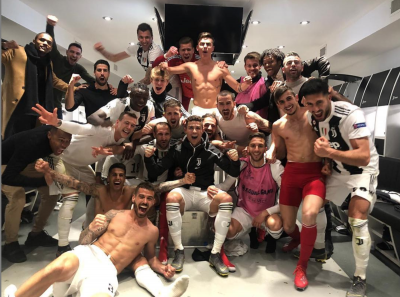 Juventus celebrated an incredible comeback victory against Atletico Madrid to book their place in the Champions League quarter-finals.

ROME - Italian Serie A leaders Juventus have been drawn against Dutch outfit Ajax in the Champions League quarter-finals.

Juventus, who are on course to win an 8th successive domestic title, produced a stellar performance led by star-man Cristiano Ronaldo on Tuesday night to overturn a 2-0 first leg defeat and blow away a stunned Atletico Madrid.

While they avoided the likes of Barcelona and Manchester City, Juventus would be unwise underestimate Erik ten Hag’s team as Real Madrid discovered at their cost in the round of 16.

Ajax, the youngest side in the competition, produced a masterclass to eliminate holders Madrid with a 4-1 victory away at the Bernabeu which sent shockwaves throughout the footballing world.

The two sides will meet on the 10 and the 16 March, with Juventus to enjoy the advantage of a home fixture for the second leg.

The winner of this fixture will play either Tottenham or Manchester City after the two English sides were drawn against one another.

On the other side of the draw, Manchester United will host Barcelona while Liverpool will hope to overcome Portuguese side Porto for the second year running in the competition.

Meanwhile, in the Europa League Napoli were drawn against Arsenal. Napoli will be slight favourites going into the tie and will play the second leg at home but were given arguably the hardest quarter final draw.

They will come up against a resurgent Gunners team who have climbed to within a point of 3rd place in the Premier League and who overturned a 3-1 first leg loss to progress at the expense of Rennes on Thursday night.

Napoli are now the only Italian side left in the competition after Inter Milan were knocked out by Eintracht Frankfurt after two disappointing performances.