Sustainable Arab Gulf future away from oil explored at EGIC 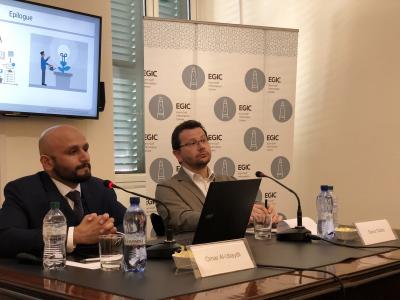 ROME - The march towards a sustainable economic and environmental future for the Arab Gulf in the light of findings released in the 2018 Bahrain Human Development Report was Friday explored at the Euro-Gulf Information Centre (EGIC) headquarters in Rome.

Sustainability and growth, both economic and social, are ever more seen as markers for the stability and prosperity of nations in the years to come, and are of the utmost importance for Gulf nations, of which Bahrain is a microcosm, as the region seeks to diversify its industries, move away from its unsustainable economic dependency on oil, and become more conscious of the environmental damage that this raw material effects.

The event was introduced by Professor Davor Džalto, Program Director for Peace Studies at the American University of Rome, who called for a greater emphasis to be placed on education. Knowledge, he posited, should be seen as critical for nations when they considered their plans for continued development.

He spoke first looking back through time at the effects of good education, highlighting the economic boom which came about as a direct consequence of “the rise of a society of knowledge… of research and of innovation.”

He went on to juxtapose this with his concerns regarding contemporary education, namely the lack of critical thinking and the heavily business-orientated focus of current learning, that he believed could impinge on an educative freedom and future growth.

Džalto then introduced Dr Omar Al-Ubaydli, Programme Director for International and Geo-Political Studies at the Bahrain Centre for Strategic, International and Energy Studies, who moved the conversation to the Arab Gulf more specifically and presented the important work Bahrain has already undertaken as it aims to fulfil its ‘Economic Vision for 2030’ programme.

Bahrain, a nation only free from British rule in 1971 that is striving to develop and defend its sovereignty, has seen notable growth in its economy and society over the past 15 years. Bahrain ranks 31st worldwide for Information and Communication Technology, behind only Israel in the Middle East and notably above Italy, excels in the inclusion of women and migrants in the workplace, and has seen a telecommunications overhaul result in a booming privatised sector in healthy competition.

However, Al-Ubaydli remained grounded and acknowledged there was still much to be done to move away from a dependence on oil. Bahrain produces an average of 200,000 barrels of oil a day, and while this number barely holds a candle to the 9 million barrels Saud Arabia produce in the same time frame, it still accounts for around 90 per cent of the nation’s exports and 80 per cent of its total government revenue. Its importance to the economy has decreased drastically in the last 15 years, but there is still a lot of work to be done.

Al-Ubaydli went on to describe how, fiscal dependency aside, the over-reliance on oil had also led to worryingly low levels of innovation and dynamism across all industries. According to statistics released by The World Bank in 2014, 0.1 per cent of Bahrain’s GDP was spent on research and development, substantially lower than the Middle Eastern average of 0.9 per cent and world average of 2.2 per cent.

The World Bank also released statistics indicating that the number of patents and industrial designs in Bahrain, a number that also lies significantly below the world average, had defied global trends and seen a stagnation of growth, and even at times a decline, in recent years.

Yet as Al-Ubaydli drew to a close, there was notable optimism to his vision of the future. He spoke confidently of a mindset of sustainability that was beginning to take root in Bahrain’s society, not simply amongst younger generations, and of a society that was conscious of its need to evolve and not remain bound to its far from bottomless oil reservoirs.

There is optimism for a future in which competitiveness, fairness, and sustainability, the key principles of the Economic Vision for 2030, can dictate Bahrain’s, and the Arab Gulf’s, continued economic and social development.