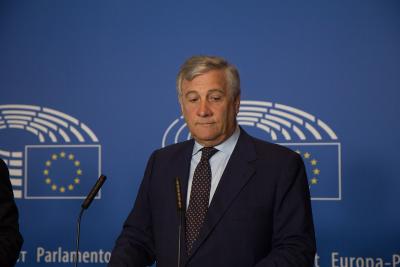 The President of the European Parliament sparked an outcry after praising parts of Mussolini's regime. Photo credit: Olaf Kosinsky

Tajani, who is also the Vice President of Berlusconi’s right-wing Forza Italia party, praised Mussolini’s work in advancing Italian infrastructure during an interview on Radio 24.

“Mussolini?” he said, “Up until he followed Hitler and declared war on the world, up until he became a promoter of racial laws… did some positive things for infrastructure in our country… One must be objective.”

He went on to say: “I’m not a fascist, I’ve never been a fascist and I do not share his political views. However, we must be honest, Mussolini built roads, buildings, sports facilities, and he reclaimed many parts of our Italy.”

Mussolini ruled Italy between 1922 and 1943, and was an important ally of Adolf Hitler’s Nazi regime in the early years of the Second World War. It is estimated that he was responsible for the deaths of over 400,000 people during the war years, and had some 20 percent of Jews in Italy deported to German concentration camps.

Tajani has since come under fire for seemingly downplaying the atrocities Mussolini’s regime committed.

Tajani later argued that his words had been twisted but has since apologised for his statements. “I apologise to all those who may have been offended by what I said. My words did not in any way attempt to justify or downplay an antidemocratic regime,” he said.

His words referenced former parts of Italy that went to Yugoslavia after the Second World War and form part of modern-day Slovenia and Croatia. Tajani later apologised for his actions.