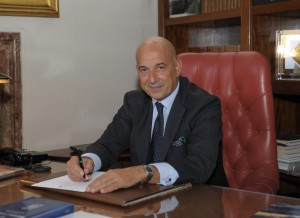 ROME - The Finnlines Group’s January–December 2018 financial records show off an increase of 12.5 million euros to 95.1 million euros. Revenue also increased by 9.9 per cent to 589.4 million euros over this same period.

During the fourth quarter, the cargo volumes remained strong, with revenue increasing when compared to last year from 131.8 million euros to 141.5 million euros. The result for October–December was 19.7 million euros.

Finnlines strategy - to grow together with customers, to increase efficiency of the capital employed on the fleet and to continue investing in sustainable development - is paying off as the company continues to grow year on year.

Finnlines is fully owned by Naples based Grimaldi Group, whose President and CEO Emanuele Grimaldi said that the company will “continue to deploy larger and larger vessels in both the ro-pax and ro-ro segments, creating economies of scale [and has] also focused on route and vessel optimisation. All this has improved the utilisation of our fleet assets.”

He went on to add: “In April 2018, we initiated a EUR 200 million Green Ro-ro Investment Programme by ordering three new green 5,800-lane-metre ro-ro vessels. But that is not all – we are currently designing and developing a new ro-pax class concept for Finnlines. These Superstar ro-pax vessels will be bigger than our existing largest Star class vessels and they will also meet the highest technical and environmental standards. These major investments will further contribute to reducing fuel consumption as well as CO2 and other emissions”.

Within the industry, the International Maritime Organization has set a very high target – a 50 per cent reduction – in the key greenhouse gas emissions by 2050, compared with the 2008 levels. Sulphur dioxide emissions (SO2) must also be reduced further.

Finnlines began installing emission abatement systems several years ago and 19 of the 21 vessels have been fitted with this technology. Reducing fuel consumption and cutting harmful emissions have been one of the key elements of the Group’s strategy for a long time.

In order to survive in an industry facing public pressure to put the environment first, and to appease demands from customers to introduce regulations that vastly reduce emissions, Finnlines have had to constantly upgrade its fleet and make use of technological advances throughout the supply chain.

The company has, therefore, invested over 1 billion euros during the past decade, and they aren’t stopping there. As Grimaldi said, “we will continue to implement our strategy with determination and with consistency by investing over EUR 500 million more in the coming three to four years for our customers who will grow together with us.”