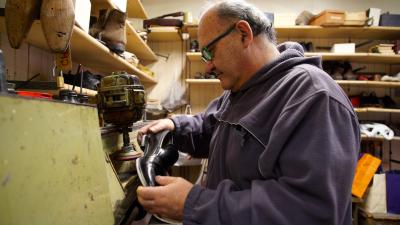 “When women walk, they sound like a bersagliere (marksman),” he says, a phenomenon he blames on inferior quality footwear.

“Now the shoes are all plastic … made in China. Even Italian shoes are almost completely synthetic or made with imitation leather,” says Pino, who has anglicised his business name to Speedy Shoes Center. Quality leather shoes with rubber heels and soles allow a woman to walk in silence.

It is 10:30 a.m. and his navy blue puffer jacket is still zipped. He has not yet had to change into his work clothes. No customers have entered his workshop in Rome’s Tuscolana area.

According to the artisan shoemaker and repairer, who has been perfecting his craft for the past six decades, no one wants to pay for quality, especially when a pair of plastic shoes cost 18 to 20 euros. In some cases, that is below the cost of repair.

“People will buy cheap shoes, throw them away when they break and then buy a new pair,” he says.

Nicola Petrelli, 63, a shoemaker in the warren of medieval streets between the Quirinal Palace and the Trevi Fountain, echoes Pino’s sentiments – “It’s hard to earn a living,” he says. “Fifty per cent of the shoes that are sold today are plastic. If a shoe costs 30 or 40 euros, no-one is likely to repair it.”

Pino says that trend began 20 years ago and since then his foothold in the market has been slowly disintegrating. He believes it’s too late to resuscitate it.

“How do you stop the sea from flowing? You can divert a river, but the sea can’t be stopped,” he says. “They’ve left [the artisan] to die.”

Disinterested in the family business, Pino’s three children have pursued their own dreams, leaving him without a business successor. There have not been any enquiries about apprenticeships either.

“I’ve been here for 30 years … no-one has ever come past and said, ‘do you need someone to train as a shoemaker?’” He maintains none have asked the question because they’re not interested in the profession.

Mr Petrelli has had a different experience. He has trained three students - a Japanese woman in the late 1980s; a New York man who spent around seven years under his wing in the 1990s and, just a few years ago, a local law enforcement officer.

“I taught them all for free,” he says.

But to have a paid apprentice is something he could not afford, says Mr Petrelli, who describes his own mentor, Luigino Cattaldo, as “one of the best shoemakers in Italy.”

The challenges Pino and Mr Petrelli face are emblematic of those faced by many other craftsmen in Italy who are willing but often unable to pass the baton to a younger generation.

In the last five years the number of artisan firms operating has plummeted by some 100,000, a report by Unioncamere has found. These art trades, as they are internationally classified, have decreased by five to 10 per cent per year on the peninsular.

“The decline in the sector equates to the loss of wealth, not only productive and therefore economic, but above all cultural, artistic, aesthetic, human and ethical,” says President of UNSIC, Domenico Mamone. “An artisan is synonymous with experience, competence, talent, expertise and dedication.”

The hardest hit industries are carpentry, ironworking and construction, he says. There has also been a sharp reduction in the number of blacksmiths, tilers, marble workers, turners and millers.

One problem is that the trades are no longer revered. They have suffered a “cultural depreciation” and are not attractive to young people who are lured by the “so-called intellectual professions,” which “guarantee safer, less tiring and better remunerated occupations,” Mr Mamone says. “It should not be forgotten that many craftsmen close their businesses not due to lack of work, but lack of successors.”

Among Mr Mamone’s suggestions to redress this imbalance are less aggressive and lower taxes, incentives for innovation and more training opportunities.

Co-founder of Creative Italy, Federica Baggiani, who has been connecting students with artisans through craft courses since 2005, is passionate about keeping these age-old arts alive.

“There are countries that still believe in the crafts and many foreign students are interested in coming to Italy to learn a trade,” Ms Baggiani says. “These craftsmen and their crafts should absolutely not become extinct.”

Fellow co-founder Laura Notarbartolo says keeping artisan businesses hard at work in both highly and sparsely populated areas throughout Italy is positive in many respects.

“It maintains tried, tested and true practices and continues to promote the use of our native language which is increasingly being subjugated to those who only speak English,” she says.

Many of Ms Baggiani’s international students have taken the knowledge they have gained at a professional level back to their own countries where they have built their own artisanal businesses, she says.

Ms Baggiani finds it especially rewarding when she learns clients have opened their own shop or online craft portal.

“It takes me to seventh heaven; I’m so proud of my students,” she says.

Despite being past retirement age and his business only just breaking even, craftsman Pino continues to ply his trade.

“I come to work because I like my work … I like my work,” he says. Pino still reminisces about a time not long ago when business was thriving and he contributed to the “good culture” of women walking in silence.

“Women shouldn’t draw attention (to themselves) due to noisy shoes; they should be noticed for their beauty.” 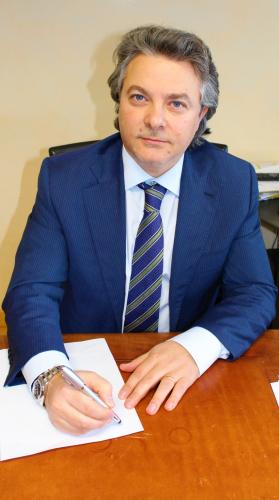