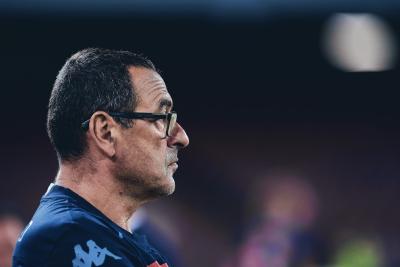 Maurizio Sarri has had a turbulent start to his managerial career in England. Photo credit: These Football Times

ROME - At the final whistle of the FA Cup tie between Chelsea and Manchester United earlier this month, the vitriol aimed at Chelsea's manager Maurizio Sarri from his own fans, reached fever pitch. 'Sarriball' is no longer popular and in the ever-inventive world of football management, he is the latest in a long line of Italian managers to be accused of having no plan B. The question facing Chelsea owner Roman Abramovich is whether Sarri's philosophy is worth the short-term pain.

After starting the season with a string of excellent results, the former Napoli and now Chelsea manager was lauded as a genius, however just six months later the Italian is facing the sack not long after his Italian predecessor Antonio Conte befell the same fate.

Chelsea supporters have been quoted recently attacking the manager for his obstinacy and a refusal to change tactics, which ultimately results in predictability. One particularly obvious example is that Sarri has made the same substitution to bring on Ross Barkley in midfield after 60 minutes, over 20 times this season. The same change was made during the Manchester United fixture but again failed to make an impact as the Manchester team went on to complete a routine 2-0 win.

It is certainly possible to understand the wrath of the Chelsea fans given a poor run of results, which has left them in a battle for the top four Champions League spots rather than in a race for the title with Liverpool and Manchester City. However, it seems a little harsh to judge Sarri so quickly given he had very little time to implement his philosophy in the summer and has only been able to sign one player.

The Italian joined Chelsea from Napoli last year in a move which is undoubtedly the biggest of his career. While the intense, cauldron-like atmosphere at Napoli might have prepared Sarri well for the pressures of the English Premier League, his managerial CV may explain some of his perceived shortcomings.

Prior to his move to West London, Sarri had only ever managed teams in Italy where pugnacity and defensive expertise are renowned as fundamental managerial qualities. As a result, many coaches in Series A and B base their teams around firstly keeping a clean sheet and trying to score a winner should the chance present itself. The issue in the modern game is that many fans would rather see their team play an attacking brand of football and risk losing, rather than guaranteeing a draw and hoping to snatch a win.

This is perhaps most obvious in the recent fate of Jose Mourinho at Manchester United. Few can argue that the Portuguese is one of the greatest managers of the last decade and his 'win at all costs' attitude certainly has its advantages. However, even in Mourinho's most successful season where Manchester United finished second behind their rivals Manchester City, Mourinho was criticised for playing boring football, in particular when compared to his closest foes Pep Guardiola and Jurgen Klopp.

To give him credit, the concept of 'Sarriball' is essentially a fast-paced, possession-based style of attacking football much like the style of play made famous by Pep Guardiola during his reign at Barcelona. The typical 'Sarriball' features short and quick passes designed to move play as far up the pitch as quickly as possible.

Should Sarri become the latest in a long list of Chelsea managers to face the chop, it will be in part put down to a lack of time at the helm. The Guardiola brand of defend from the front and keep possession has now tasted success in multiple countries and has inspired a new generation of managers however it requires time and quality players in order to implement and enjoy prolonged success. Sarri has been given in effect no transfer window time or backing and has tried to adapt his Chelsea side without a proper pre-season.

In a similar way to fashion, football philosophies come and go. Although the Guardiola philosophy seems to be foolproof, the Catalan was exceptionally fortunate to inherit a team including Iniesta, Xavi and Messi at Barcelona and has spent well over half a billion pounds in order to create his Manchester City squad. It's not always that easy and managers need to be flexible and have a plan B. The lack of adaptability, even when things are going badly wrong, such as in the 6-0 defeat to Guardiola's Manchester City, which has seen Sarri draw the most deafening criticism.

One potential replacement for Sarri would be Diego Simeone and Atletico Madrid are a prime example of what can be achieved when using limited resources to the best possible effect. Simeone has great attacking options at his disposal but Atleti are well-practised in the art of defence.

In somewhat of a surprise result last month, Atletico beat a Juventus side which included Cristiano Ronaldo in the Champions League and generally outmanoeuvred their Italian counterparts. Massimilano Allegri and previously Antonio Conte have enjoyed outstanding success with the Old Lady in Serie A but have struggled to turn these domestic performances into international dominance.

Juventus had a run to the Champions League final in 2015 and used a solid defence to thwart teams including Real Madrid and Monaco on the way to the final. However the Italian side was ultimately undone by Barcelona's attacking might and has been unable to replicate a similar run to the final in the last few years. While it is too simplistic to attribute the struggles of Italian sides in European competition to tactical stubbornness or a refusal to change the traditional way of playing, the typical Italian coach does need to modernise.

Mourinho and Simeone have been at their most successful when managing teams which have the potential to spring forward and counter attack, yet use a solid defence to draw on the opposition. Should Abramovich allow Sarri the opportunity to implement his philosophy, Chelsea fans may well find that a Guardiola style champagne football follows in the long-run, however perhaps the Italian needs to adapt to a more traditional style in order to buy himself some time.