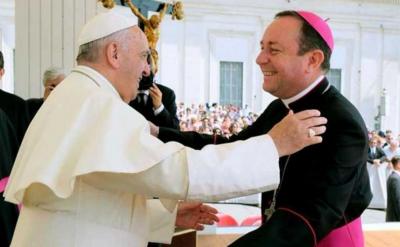 VATICAN CITY – Argentine Bishop Gustavo Oscar Zanchetta, who is under investigation by the Congregation for the Doctrine of the Faith following allegations of sexual coercion and misconduct involving seminarians, is attending Pope Francis’ annual Lenten spiritual retreat, Il Messaggero reported.

Zanchetta is currently on a leave of absence from his position at the Administration of the Patrimony of the Apostolic See (ASPA) while under investigation, but is attending the retreat in the Casa del Divin Maestro in Ariccia, which is taking place March 10-15, the newspaper said.

Given the accusations that the bishop is facing, the pontiff’s inclusion of him in this event has raised controversy as, if Francis is to argue convincingly that he is serious about eradicating sexual abuse within the Church, continuing to connect himself with Zanchetta could become an obstacle for him.

After resigning as bishop of Orán in August 2017, in December 2017 Zanchetta was appointed by Pope Francis to a position within the APSA, which oversees the Vatican’s assets and real estate holdings.

The pope has apparently known about the allegations of misconduct regarding Zanchetta since 2015, and had even been sent crude selfies of the bishop to review after pornographic photographs were found on his mobile phone.

However, Francis is said to have accepted Zanchetta’s excuse that his mobile phone had been hacked, and dismissed the allegations. The pontiff then proceeded to give the bishop a Vatican position two years later.