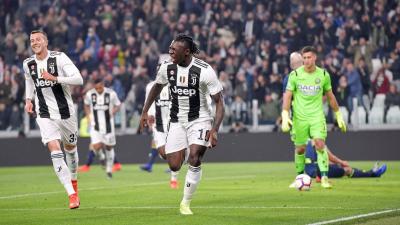 ROME - Juventus took another big step towards retaining their Serie A crown as nearest rivals Napoli faltered again to increase the gap at the top of the table to 18 points.

Juventus, coming off the back of a hard-fought 2-1 win at Napoli last weekend, hosted a struggling Udinese side who have only won 6 times in the league this season.

The Bianconeri fielded a slightly weakened team, starting with 19-year-old Italian Moise Kean up front and relegating Cristiano Ronaldo on the bench. The decision was undoubtedly made with one eye on Juventus’ upcoming Champions League tie in which they must overturn a two-goal deficit when they host Atletico Madrid.

However, Kean took no time at all in filling Ronaldo’s shoes, scoring twice in the first half to put Juventus firmly on top going into the break. He then continued his strong performance, winning Juventus a 67th minute penalty that gave the hosts a chance to put the game to bed.

Kean may have been disappointed not to take the penalty himself and secure a first Juventus hattrick, Emre Can taking the honours and coolly slotting the ball past Udinese shot stopper Juan Musso, but there are nevertheless many positives he can take away from his performance.

Midfielder Blaise Matuidi added a fourth soon after before Kevin Lasagna scored what was merely a consolation for the visitors with time running out. Juventus travel to Genoa next week with an eighth straight scudetto firmly in their sights.

Napoli’s slim chances of catching reigning champions Juventus suffered yet another blow as they could only draw away to mid-table Sassuolo. Carlo Ancelotti’s men would have come into the game knowing that only victory would do, but after this 1-1 result their title ambitions are likely all but over for this year at least.

Both sides passed up a string of good first half opportunities before the hosts broke the deadlock 7 minutes after the break through Domenico Berardi, who made the most of some mediocre Napoli defending to volley home from six yards out.

It looked like Sassuolo were on course for a famous victory, but Napoli forward Lorenzo Insigne had the last word with four minutes to go, slotting a wonderful curled effort into the far corner from just inside the box. Napoli will now have to keep one eye on the two Milan sides who have closed the gap to second place to just 6 points in the last 8 days.

Krzysztof Piatek kept up his stunning recent goal scoring record, his second half strike proving to be the game’s winner as bottom placed Chievo hosted AC Milan. The Rossoneri had opened the scoring when Lucas Biglia curled a wonderful free kick into the top corner of the Chievo net after 31 minutes, but were then pegged back by a Perparim Hetemaj header just before half-time.

Chievo have a mountain to climb if they are to avoid relegation this year, while AC Milan’s Champions League ambitions remain very much alive.

Inter also took all three points, winning comfortably at home to SPAL to keep the pressure on third place. Lautaro Martinez had an early goal ruled out by VAR but Inter were not put off their stride and sustained pressure saw Matteo Politano volley home and hand Inter the advantage. Gagliardini then doubled the score soon after to ensure a 2-0 victory.

Inter will hope they can now carry this momentum forwards into the Milan derby next weekend as a win would see them leap frog their arch-rivals and reclaim third spot.

Roma hosted Empoli in what was Claudio Ranieri's first fixture since his managerial return to the club. Ranieri was soon off to a dream start as Stephen El Sharaawy buried a powerful shot into the bottom corner from 25 yards out. Juan Jesus accidentally diverted the ball into his own net soon after, but a Patrik Schick header saw Roma take the lead before the break.

All was not plain sailing for Ranieri however as Roma had Alessandro Florenzi shown a second yellow card with ten minutes left on the clock. Empoli did bundle in an equaliser, only for VAR to step in and give Ranieri a winning start to his campaign at the club. He will need his side to produce more winning performances if they are to guarantee Champions League football for the coming season.

Lazio followed up their impressive 3-0 derby victory against Rome last weekend with an important point away at Fiorentina. Immobile had given the away side an early lead, but Luis Muriel drew Fiorentina level as the game moved into the final half hour.

Fiorentina have now drawn almost half of their Serie A matches this season and will undoubtedly be looking to climb up the table from their current 10th place spot.

Elsewhere, Frosinone and Sampdoria suffered 2-1 losses at the hands of Torino and Atalanta respectively while Bologna’s bid to avoid relegation was greatly helped by a spirited 2-0 victory over Cagliari that sees them move to within 1 point of safety. Parma won 1-0 at home to Genoa to jump above them into 11th place.