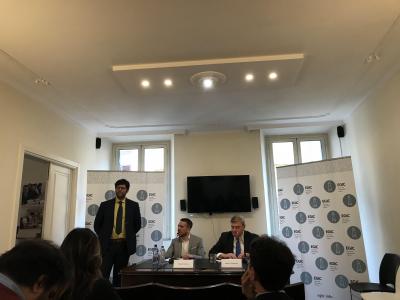 ROME – With the impending deadline for Brexit being just three weeks away, one of Britain's most respected Members of the European Parliament (MEP), Honourable David Campbell Bannerman, predicts that the run-up to Brexit will climax with an accidental no-deal.

“The likelihood as I see it is that we are headed for an accidental no deal,” declared Mr Campbell Bannerman, speaking at the Euro-Gulf Information Centre (EGIC) to explain the potential implications for trade between the United Kingdom (UK) and European Union (EU) countries after Brexit.

Mr Campbell Bannerman addressed the economic and political dynamics involved in the rapid approach of Brexit, coupled with the growing confusion in Europe as to what happens next.

In this context, Italy is a key player due to its strong relationship with the UK on trade, investment and labour, and the participation in joint international projects.

Referring to Brexit, Campbell Bannerman opened the seminar with the question “Where are we now and how did we get here?” He emphasised the need to make sense of what it is going to produce in terms of future avenues of post-Brexit Italy / UK relations, highlighting that the Italian community is highly valued in UK.

If a no deal is to be the outcome, the MEP stressed the need to appreciate the reality that “there is in fact no such thing as no deal, and I think this is a very important point.”

He then explained the multiple smaller bilateral deals that will inevitably be made even if a no deal Brexit is the result. “Be reassured that it is not a disaster, there has been a lot more preparation than isadmitted to,” he said.

For instance, the UK have already given Italy the permission to export cars and food to Britain in the event of a no deal.

Campbell Bannerman also clarified that for him, one of the main point of focus is the GATT Article 24, the World Trade Organisation’s (WTO) general agreement on tariffs and trade, which he is currently recommending to the government. Its implementation would allow the creation of a one page free trade agreement which would exclude tariffs and quotas.

This would be advantageous for the UK in terms of being “a neat solution to give the UK more time and breathing space,” said Campbell Bannerman. “Article 24 gets us out of jail and gets rid of tariffs preventing damage to the UK economy and trade,” he added.

Moreover, given that the UK buys many more goods than it sells, it would in fact be more beneficial for the EU and would make the process of coming to a free trade agreement far more straight forward.

Next, Campbell Bannerman underlined the problematic nature of how there are two competing factions in Britain. The first is the elite establishment who believe that Brexit is a disaster and want to stay as close as possible to the EU, with the hope of potentially re-joining in the future.

The second group is the Brexiteers who “want the UK to a be a friendly independent sovereign country that looks to the world; a more global, more outward looking country, with a more balanced migration policy,” explained Campbell Bannerman.

“The problem is that the UK has a population that wants to leave the EU, but a parliament that wants to remain and who are trying to frustrate the situation,” said Campbell Bannerman. Therefore, this clash between the two visions of the elite that has put parliament out of sync with the population needs to be tackled.

Finally, Campbell Bannerman highlighted that the main economic benefit of Brexit for the UK is the possibility of having comprehensive free trade agreements across the world, given the UK’s strong natural links with countries including India and United States.

According to the MEP, these agreements will also allow the UK to “scrap a lot of EU restrictions that make business a long and difficult process,” giving the UK more flexibility.