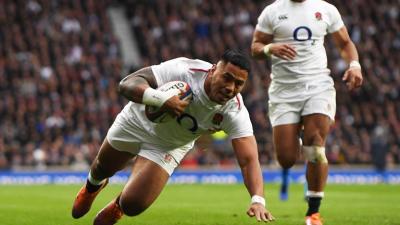 Manu Tuilagi slides in for one of England's 8 tries. Photo credit: England Rugby

ROME - Italy’s miserable Six Nations run continued as they fell to a heavy defeat at the hands of a dominant England team. The game ended 57-14 in favour of hosts England and ensured that the wooden spoon is still very much on the cards for the away team.

Italy came into today’s game as clear underdogs, and it took England less than 10 minutes to open the scoring. Jamie George was well placed at the back of a rolling maul to touch down and score the first of the home side’s eight tries.

The Azzurri did show some early resistance and stand-out player Tomasso Allan produced a wonderful piece of trickery to hold off the England defence before touching down in the corner and then landing the conversion to level up the game at seven points apiece.

This however was the last of Italy’s joy in the first half, as Johnny May, Manu Tuilagi and Brad Shields all scored converted tries to ensure that England wrapped up their bonus point before the break. England captain and fly-half Owen Farrell also knocked over a penalty as his side went in 31-7 up at half-time.

Little changed as the game resumed, and it wasn’t long before Tuilagi had his second of the game.

While some lazy England defending did allow Italy to get on the score sheet once again, Luca Morisi touching down in the corner after some patient Italian build-up play, the Azzurri’s afternoon was to go from bad to worse.

George Kruis ran down a kick as Italy tried to clear their lines to go over, before a powerful run by man of the match Joe Cockanasiga set up a Dan Robson score as the clock approached 70 minutes.

Kruis then ran down a second kick shortly after which Brad Shields collected to secure his brace and complete the afternoon’s rout.

The result leaves England in second place in the table, still with a chance of snatching a third Six Nations title in four years depending on how Wales perform when the host Ireland at the Millenium Stadium next week.

Italy, on the other hand, will have to regroup and drastically improve going into the final weekend, where they entertain France at the Stadio Olimpico, if they are to avoid a 14th wooden Spoon in 20 years.