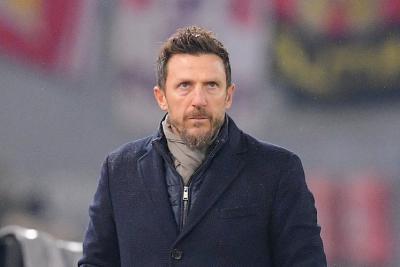 Di Francesco has been with the club since June 2017 but has struggled for consistency in recent times. Photo credit: AS Roma

ROME - AS Roma have sacked head coach Eusebio di Francesco after a string of disappointing recent performances culminated in the team being dumped out of the Champions League this week.

The decision was announced on Thursday, the club’s Twitter account writing: “AS Roma can confirm head coach Eusebio Di Francesco has left the club with immediate effect. The club would like to thank Eusebio for his work during his time at AS Roma and wish him success in the future.”

Many of Roma’s star players were quick to tweet their gratitude to their former coach. Winger Cengiz Under wrote: “You’ve always believed in me. You’ve always supported me. Thank you for everything boss!”

Di Francesco, a previous Serie A winner with Roma in 2001, took the reins in June 2017 and proceeded to guide the club to great heights last year. Roma knocked Chelsea out of the Champions League with two impressive performances, before 90 minutes of heroics at the Stadio Olimpico saw his side beat favourites Barcelona 3-0 to overturn a first leg deficit and progress to the semi-finals.

This season, however, has failed to live up to previous glory as Roma lie only in 5th in the Serie A, were knocked out of the Coppa Italia in embarrassing fashion losing 7-1 to Fiorentina, and lost all chance of silverware as they exited the Champions League on Wednesday night.

This midweek defeat to Porto followed a humiliating 3-0 derby loss to a Lazio side who lie below Roma in the league. The two results ultimately proved too much for the head coach to overcome.

Claudio Ranieri is set to replace Di Francesco as head coach of the Giallorossi. The Italian previously managed the club between 2009 and 2011 but is now best known for his heroics at the helm of a Leicester City team that defied all the odds to be crowned Premier League champions in 2016.

More recently, however, Ranieri was unable to inspire a struggling Fulham side who lie in 19th in the Premier League table and who face a serious relegation battle. Both he and the club will be hoping his fortunes drastically change as he returns to Roma.