Archbishop of Lyon guilty of covering up sexual abuse 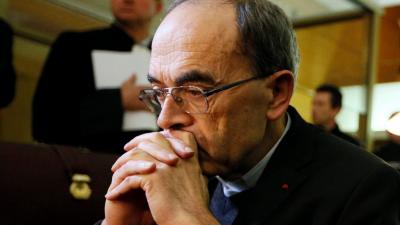 VATICAN CITY - The archbishop of Lyon and France's most senior figure in the Roman Catholic church, Cardinal Philippe Barbarin, has been found guilty of covering up incidents of child sexual abuse dating back to the 1970s and '80s.

Barbarin, aged 68, was on Thursday sentenced to a six-month suspended prison sentence in a decision that has been lauded as a “major victory for child protection” by the leader of La Parole Libérée, a Lyon-based victims’ group.

Barbarin is charged with having covered up the misdemeanours of a priest in his diocese, a certain Bernard Preynat, who is alleged to have abused over 80 minors while a leader of scout groups.

The prosecution claim that Barbarin knew of Preynat’s wrongdoings in 2010, not 2014 as the prelate states. Barbarin would therefore be guilty of having kept the incidents quiet and not having reported the priest to the authorities.

While Preynat, who will stand trial later this year, was banned from his role in scout groups in the ‘90s, he continued as a practising priest until 2015. In this period, he is believed to have held positions of authority and been directly involved in the teaching of children.

Although Barbarin has confirmed that he will appeal the decision, he also stated that he would be resigning from his position as archbishop in the coming days.

A series of letters between Barbarin and the Vatican have also emerged in which the latter advised the archbishop to dismiss Preynat to avoid any public scandal.

While the Vatican held a summit on sexual abuse in February with the aim of addressing its shortcomings, many believe the church still failed to propose any concrete measures going forwards or in meeting the demands of abuse survivors.

Now this latest verdict, less than two weeks after former Vatican treasurer George Pell was convicted of sexual abuse, is likely only to increase pressure on the Vatican to act yet further.