Roma dumped out of Champions League in extra time 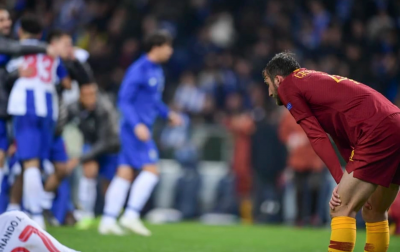 Cristante reflects on a poor Roma performance after the final whistle as his team lost to Porto. Photo credit: AS Roma

ROME - AS Roma have been dumped out of the Champions League by Porto as an Alex Telles penalty deep into extra-time helped seal a 3-1 win for the Portuguese outfit.

Roma came into the game off the back of a 2-1 first leg victory, teenager Nicolò Zaniolo bagging a brace and all the plaudits for a stunning performance.

However, the Giallorossi produced a far less free-flowing display this time around and spent much of the game unable to settle into any sort of rhythm. Unable to produce last year’s heroics that saw them knock out Barcelona and reach the semi-finals of the competition, Roma now drop out at the Round of 16 and see their chances of silverware this season all but disappear.

Porto started brightly and only 4 minutes in they almost broke the deadlock, Corona blazing a shot over just over the bar.

Sustained pressure eventually paid off, and they did take the lead soon after in the 26th minute through Francisco Soares. The forward had the simplest of finishes from two yards out at the back post after a Manolas mistake was punished by a sweeping counter-attacking move.

Roma continued to struggle to impose themselves, and it took some individual trickery from Diego Perotti to get them back on level terms. Some quick feet drew a clumsy foul from Eder Militao in the box and resulted in a penalty which club legend and captain De Rossi classily put past Iker Casillas.

De Rossi, unfortunately for the away side, then picked up an injury and his presence was sorely missed in the middle of the park.

Porto continued to push and Moussa Marega, who worked tirelessly all game, levelled the tie up with a volley at the back post as the Roma defence fell asleep.

The game went to extra time, in large thanks to a handful of heroic saves from Roma’s Robin Olsen, and Dzeko spurned two great opportunities to take the Italian outfit through. He could only smash over from close range with ten minutes to go, before his weak chip over Iker Casillas was cleared to safety by veteran defender Pepe.

As the game seemed to be heading to penalties, VAR stepped in to create some late drama. Referee Cuneyt Çakir had initially missed a foul by Florenzi, who pulled Porto player Fernando to the ground at the back post. However, after consultation with VAR, he awarded a penalty to the home side which Alex Telles smashed home.

The home side held on for a 3-1 victory, however Roma will have been disappointed not to get a penalty of their own in the dying moments. In the 122nd minute, Schick went to ground on the edge of the penalty area as he chased to keep a ball in play. It seemed innocuous at first, however replays showed that he was caught from behind by Porto forward Marega.

While the incident was reviewed by VAR, referee Çakir did not check the incident himself on the television monitor. One can only assume he was advised that the incident was not “clear and obvious” enough, as the rules state it must be, to overrule his initial decision.

The result piles pressure onto Roma coach Eusebio di Francesco whose side have now been eliminated from the Champions League, the Coppa Italia, and lie in 5th in the Serie A.

In other results, both Ajax and Manchester United tore up the script as they knocked out holders Real Madrid and Paris Saint Germain respectively from the competition. Ajax produced a stunning display to win 4-1 away from home at the Bernabeu, while Manchester United capitalised on PSG errors and a controversial VAR decision to continue PSG’s Champions League curse.

Tottenham have also progressed to the quarter finals, winning 4-0 on aggregate against Borussia Dortmund.