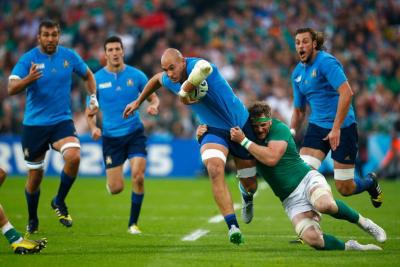 Sergio Parisse hauled down against Ireland as Italy come up short in the Six Nations. Photo credit: Rugby World Cup

ROME - Italy go into the final two rounds of this year’s Guinness Six Nations staring, yet again, down the barrel of the competition’s wooden spoon.

They opened their 2019 account with a 33-20 loss away to Scotland but, with 17 of these points scored in the last 10 minutes with Scotland down to 14 men, they were heavily flattered by a score line that papered over some glaring cracks in their performance.

They followed this up with losses to both Wales and Ireland, losing 26-15 and 26-16 respectively. While these performances saw a more spirited display by the Azzurri and showed that they were able to remain in contact, just, with the world’s leading rugby nations, both opposition outfits were far from their free-flowing best.

Wales, in particular, were unrecognisable from the ruthless and disciplined team that came from behind to beat Grand Slam hopefuls England two weeks later.

These results mean that Italy have now lost 20 consecutive matches in the competition, a losing streak that dates back to 2015 and this is far from the only statistic that sticks out.

First included in the tournament in 2000, when the Five Nations expanded to its current format, Italy have finished bottom of the heap in 13 of the 19 subsequent tournaments and look on course to so again in 2019.

This would see them win a 14th wooden spoon in the tournament. Scotland rank second in the Wooden Spoon winners table with 4 while England and Ireland have never won, if it truly is winning, the award.

Worse still, 8 of these 13 years the Azzurri have been whitewashed and finished with no points at all which, again, is still on the cards for this year’s edition. After all, games against England and a resurgent France are far from easy tests to close their account on.

Going into this year’s tournament, Six Nations chief executive Ben Morel made very clear that the prospect of relegation being introduced into the tournament was “absolutely not on the agenda”.

Speaking to BBC Sport in February, Morel said “We are very happy that Italy is part of our championship”.

He went on to address the notion of adding a seventh nation to the competition so as to avoid the predictability of the competition’s outcome, stating: “There is a lot of temptation for sports generally to drive value by driving volume – rugby can’t.

“Player welfare is paramount; calendar and management of calendars is paramount. Adding more matches is not, for me, the immediate solution. The solution is to actually work on the value”.

However, the upshot of these latest results is that Italy are likely to again face questions over the legitimacy of their place in the tournament. Critics have for a few years now touted the idea of a relegation system whereby the worst team would periodically be replaced by another worthy European outfit so as to end the predictability of certain games and tournaments as well as to give other developing rugby nations a chance at exposure to the top level of the game.

A quick look at the World Rugby Rankings shows that while the five other nations involved in the tournament all place in the top 10 nations worldwide, the lowest of them France in 8th, Italy rank substantially lower in 14th.

Furthermore, Georgia, a team often put forward as a replacement for the Azzurri currently sit above them in 12th while Russia, Spain, and Romania all also make it into the top 20.

Of course, Georgia have reached their ranking in coming up against weaker opposition but are quickly making a name for themselves in the rugby world and England have more than once invited them to training sessions as they are viewed as a tough and very physical unit, especially in the scrum.

They may not yet have the depth of squad that Italy do have, but those who argue in favour of their inclusion in the Six Nations state that exposure to a higher standard of rugby would help their progression immensely.

As it is, they have won 9 Rugby Europe International Championships, seen as the second tier to the Six Nations, in the last 11 years and grabbed headlines by finishing third in their group at the 2015 Rugby World Cup. Seemingly, then, they could do with a new challenge.

Relegation for Italy would be a tough pill to swallow as they have brought some moments of magic to the tournament, and the gap between a top Tier 2 side to a Tier 1 one that they are trying to bridge is certainly challenging. However, fans of both the nation and the sport would certainly like to see more fight from a team that has at times shown such promise.

Their limited development stands out yet further when compared to that of their female counterparts who in the Women’s Six Nations currently lie in second place having toppled Ireland for the first time in their history.

It seems Italy’s position in the tournament is safe for the coming few years at least. However, silencing their doubters and a return to winning ways is surely of paramount importance for a team in need of some inspiration and a fresh start in the lead up to this year’s World Cup in Japan.

They’ll have tough tests to face in September, pooled in with both New Zealand and South Africa, so some strong performances and perhaps even a surprise result to close out the Six Nations wouldn’t go amiss for the Federazione Italiana Rugby.