Juventus hold on to beat Napoli and extend Serie A lead 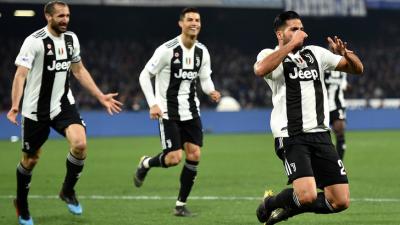 ROME - Juventus took an important step to securing an 8th successive Serie A title with an away win against a spirited Napoli team this weekend.

Napoli, who sit in second place, came into the game knowing that 3 points were vital if they had any chance of stopping Juventus’ relentless march to the title, and they soon had a mountain to climb as their goalkeeper Alex Meret was shown a straight red card in the 25th minute.

On the receiving end of a poor back pass, Meret could only bring down Cristiano Ronaldo as he attempted to stop the latter rounding him to stroke in what would have been a certain opener.

Juventus punished Napoli from the resulting freekick, Miralem Pjanić curling in a peach from the edge of the box.

While Napoli did come close through Lorenzo Insigne and Piotr Zielinksi, the latter denied only by the upright, they were soon left ruing their missed chances as Emre Can headed a Bernardeschi cross past substitute goalkeeper David Ospina to double Juventus’ lead going into half time.

Napoli, however, would not lie down and threw on Dries Mertens after the break. The stadium came to life soon after as first half hero Pjanić turned villain for La Vecchia Signora, receiving a second yellow card to even the teams out at ten apiece.

Napoli sensed there was something for them in this game still, and minutes later an Insigne cross from the left dropped perfectly for José Callejón to stroke the ball home from six yards and half the deficit.

Juventus looked uncharacteristically rattled, and the hosts were awarded a golden opportunity to complete a famous comeback in the 83rd minute as Alex Sandro was controversially deemed to have handled in the area after consultation with VAR.

Insigne, however, saw his firmly struck penalty come back out off the post and Juventus showed their class by snuffing out a spirited Napoli display for the last few minutes to take a 2-1 victory and increase their lead at the top of the table to 16 points to all but wrap up this year’s title.

Saturday saw a lively Rome derby at the Stadio Olimpico end 3-0 to Lazio who appeared changed outfit from that which lost the same fixture earlier in the season 3-1.

Goals from Caicedo, Immobile and Cataldi proved the difference for Simone Inzaghi’s men, who also had shot stopper Thomas Strakosha to thank for a string of top saves with the game poised at 1-0.

Rome’s makeshift defensive pairing of Fazio and Juan Jesus, in for an unwell Manolas, was too often split open and a late red card for Aleksandar Kolarov piled on the misery for AS Roma. The result leaves Lazio in 6th place, three points behind rivals Roma but with a game in hand.

Inter Milan missed an opportunity to close the gap to the top as the lost 2-1 away from home to Cagliari. Two first half strikes proved too much for an Inter side still without star striker Mauro Icardi who remains absent from the squad following tensions between him and the club.

To rub salt into their wounds, a win for arch rival AC Milan thanks to an own goal from Sassuolo’s Pol Lirola saw the Rossoneri leapfrog Inter into 3rd place with 12 games still to play.

Atalanta and Fiorentina met again after an enthralling mid-week encounter in the first leg of their Coppa Italia semi-final which ended 3-3. The game started in a similar high scoring vein as Fiorentina scored within three minutes.

However, that was all the travelling fans had to cheer about as Atalanta soon responded through talisman Iličić who scored the first of his side’s three goals to ensure a 3-1 victory that leaves Atalanta only 3 points behind 5th placed AS Roma.

At the other end of the table, an enthralling 3-3 draw between Empoli and Parma was a highlight of the weekend’s action. Parma Captain Bruno Alves looked to have won the game for the away team with his 82nd minute strike, only to devastatingly turn the ball into his own net in stoppage time to hand a much-needed point to Empoli, who hover one place above the drop zone.

Elsewhere, Torino made it 6 Serie A matches without a loss as 3 goals in the last 15 minutes gave them a comfortable home victory over a Chievo team who remain rooted to the bottom of the table, 12 points from safety.

Udinese won 2-1 at home to Bologna to give themselves some breathing space at the bottom of the table, while Sampdoria won away at SPAL by the same winning margin with a Quagliarella brace taking him to the top of the league’s top scorers table. Genoa and Frosinone played out a 0-0 draw.

The weekend was also one of great sadness for the Italian footballing world as it marked the one-year anniversary of the death of former Fiorentina captain Davide Astori. Astori passed suddenly due to an unexpected cardiac arrest at the age of 31 while travelling to an away match against Udinese in the 2017-18 season.

Each match was briefly paused in the 13th minute, the same number worn by Astori at Fiorentina, as a mark of respect to the player.