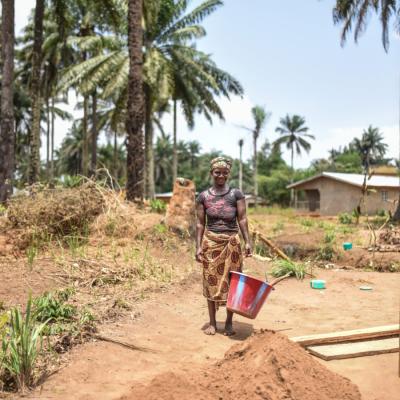 Rome – About 34,000 vulnerable rural households in Sierra Leone will benefit from a new US dlrs 72.6 million project that aims to improve food and nutrition security and raise the incomes of smallholder farmers by modernizing agriculture, increasing production and developing markets.

The financing agreement for the Agricultural Value Chain Development Project (AVDP) was signed by correspondence by Gilbert F. Houngbo, President of IFAD and Jacob Jusu Saffa, Minister of Finance of the Republic of Sierra Leone.

Project financing includes a dlrs 5.9 million loan and dlrs 5.9 million grant from IFAD. The project will be cofinanced by the private sector (dlrs 1.4 million), the Government of Sierra Leone (dlrs 8.1 million) and the beneficiaries themselves (dlrs 1.4 million). Moreover, additional cofinancing (dlrs 9.2 million) is being requested from the Adaptation Fund. Over the next few months, an additional dlrs 40.8 million will be made available under the performance-based allocation system cycle for Sierra Leone, covering the period 2019-2011, thereby reaching the total financing amount of dlrs 72.6 million.

"IFAD's allocation of dlrs 40.8 million to Sierra Leone for 2019-2021 has almost doubled compared to the 2016-2018 allocation of dlrs 21.4 million," said Lisandro Martin, Director of IFAD's West and Central Africa Division. "The strong performance of the country programme in recent years is being rewarded by IFAD's Performance-Based Allocation System."

Agriculture is the largest sector of the economy of Sierra Leone. It accounts for 62 per cent of the labour force, 59 per cent of GDP and 22 per cent of export revenues. But poverty is particularly acute and concentrated in rural areas where 59 per cent of the population lives. The new project will increase production and improve the marketing of rice, palm oil, cocoa and vegetables, contributing to the Government’s priorities of rice self-sufficiency, crop diversification and rural poverty reduction.

AVDP will invest in agricultural mechanization, irrigation and water management. It will strengthen and climate-proof rural infrastructure through the rehabilitation of feeder roads and warehouses to improve product drying and storage capacity. It will also build the capacity of smallholder farmers through farmer field schools and provide them with credit for their investments in smallholder farms. At least 40 per cent of the project's participants will be women and youth.

Since 1980, IFAD has financed nine rural development programmes and projects in Sierra Leone at a total cost of dlrs 321.2 million, with an IFAD investment of dlrs 165.4 million. These projects and programmes have directly benefited 547,500 rural households.