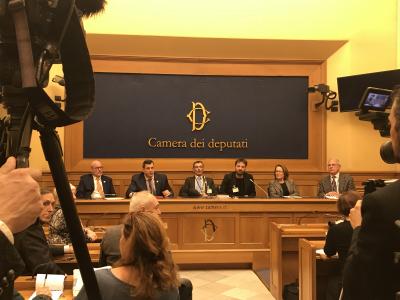 Mr Rozzi was joined by legislators, victims of abuse, and global activists

ROME –  Leading Pennsylvania politician Mark Rozzi, nationally known for his unwavering defence of survivors of child sexual abuse, and himself a victim of rape at the hands of a priest, called for the Vatican and bishops to stop hindering civil reforms and delaying justice for victims.

On the opening day of the special Anti-Paedophilia Summit called by Pope Francis in the Vatican, Mr Rozzi, Democratic member of the Pennsylvania House of Representatives, highlighted the crucial need to bring “the voices of Catholic clergy victims to light.”

Mr Rozzi previously led the indictment in Pennsylvania that resulted in a jury report throughout the state involving more than 300 priests and over 1,000 victims of abuse by the clergy.

Addressing his own experience of sexual abuse, Mr Rozzi stressed the need for a civil window to justice. “My predator priest, we put his abuse victims at over 200 … I want to know how and I want to know why, and I think I have that right to know,” he said.

“Make no mistake about it, what the Catholic Church, the Catholic conference, the bishops, the cardinals, and the Pope, what they are all doing is that they are blocking justice for all victims of sexual abuse, and that is a crime,” Mr Rozzi declared.

Anne Barrett Doyle, the co-director of BishopAccountability, an archival and research organisation founded to document the abuse crisis in the Catholic Church, discussed the results of American states that have lifted the statute of limitations.

Doyle revealed how revoking the statute of limitations in certain states has forced the U.S. Catholic Church to become “more transparent than they want to be.” “They now admit to hearing reports of nearly 7,000 ordained Catholic clergy,” she said.

Discussing the discrepancy between the U.S. and the Italian law, Doyle said, “In the U.S., they have a particular canon law which requires the permanent removal from ministry of any priest found guilty of child sexual abuse.”

However, “The Italian Church does not have that law. There is a void there. They are not being held accountable by the Italian legal system. This impunity has to stop,” she added.

“The legislation that repeals statute of limitations will save the Catholic Church. It will force bishops to become accountable, to become lawful, it will make parishes and schools safe for children,” concluded Doyle.

Mr Razzi was also joined by Tim Lennon, the president of the survivors’ network of those abused by the priests (SNAP).

“What happened to me as a child should not happen to another child,” he declared. Therefore, “Civil society is important for the protection of our community and of our children,” so that the statute of limitations is not used as a “get out of jail card,” he added.

Shaun Dougherty, also a victim of child sexual abuse, was involved in the intense lobbying efforts in Pennsylvania and New York for civil reforms to the statutes on abuse of minors.

“I encourage legislators in all corners of the globe to focus in, step up and protect your minor citizens from childhood sexual assault” he concluded.

Mr Rozzi was also joined by Peter Isely, a founding member of SNAP and Ending Clergy Abuse (ECA), and Francesco Zanardi, an Italian survivor and president of the Italian Association Rete L'Abuso.